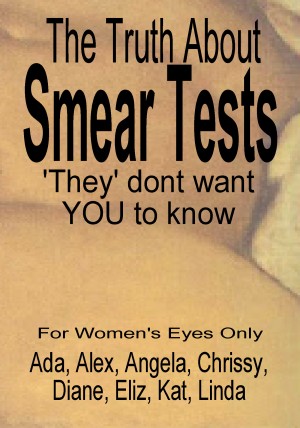 The Truth About Smear Tests 'They' Don't Want You To Know

By For Women's Eyes Only
Adult

Hello. We are a group of women who haven been harmed physically, emotionally and psycologically by having unwanted smear tests forced on us. For the past few years we have attempted to post our concerns to help other women understand the very real dangers this oft promoted 'simple and quick' procedure really poses.
Cervical cancer is very rare but this test is often put over as a life saver for women. However, it is statistically more likely to lead to overtreatment of harmless, but 'suspicious' looking cells with colposcopy, biopsy, Lleetz even a full hysterectomy than actual cancer itself.
For the past few years we have taken to the Internet to put our message out there. However, the medical profession, in the interests of making profits and what we refer to as 'keeping the herd in check' have chosen to deliberaetly remove our comments from their websites and to also ignore our written letters of complaints to them.
When a woman find out something important, she rarely keeps it to herself. In fact, the first thing a woman often does is tell other woman what she has discovered. This sisterhood has operated since the dawn of time.
When you have read our words it is often the case that things read on the Internet are not taken too seriously. What we suggest you do is find out the truth for yourself. Go on all the known medical sites - The World health Organisation, The Office of National Statistics, medical Journals such as The Lancet, BMJ even Nursing Times is helpful. But no matter what you do - do not approach your doctor or practice nurse for inforamtion. These people have been trained to fool you, trick you and do whatever it takes to force a smear test on you. They are protecting a programme that operates on women's ignorance and also because they recieve money from governments to test you for this very rare disease. By refusing or questioning this test you are threatening next year's luxury cruise or five star holiday.

Learn more about For Women's Eyes Only

So thankful for the needed info and its a giant relief for me and other survivors of sexual abuse who are also bullied in health care appointments and abused by female preditors (an issue needing atttention too) using unnecessary test their guise.

You have subscribed to alerts for For Women&#039;s Eyes Only.

Would you like to favorite For Women&#039;s Eyes Only?

You have been added to For Women&#039;s Eyes Only's favorite list.

You can also sign-up to receive email notifications whenever For Women&#039;s Eyes Only releases a new book.