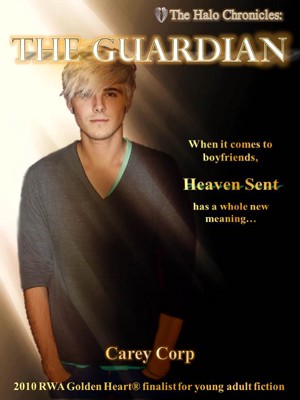 The Halo Chronicles: The Guardian

By Carey Corp
Rated 4.00/5 based on 4 reviews
Sophomore Alexia Grabovski is cursed with the ability to see halos—rings of goodness or evil—that surround the body. Gabriel is a Seraph, a guardian angel sent in the mortal body of a sixteen-year-old boy to protect Alex from a horrible fate. When they fall hopelessly in love, can they rise above human emotions to fulfill their destinies, even if the outcome rips their fragile world apart? More
High school sophomore Alex Grabovski is cursed with a gift: the ability to see the goodness and evil in her fellow human beings in the form of halos—rings of light or darkness—that surround the body. Her goals in life are to keep moving, find her best friend, and to remain invisible. A new foster family and new school offer her a real chance at a normal life. But in order to stay, she must accept that her gift, The Gift of the Saints, has been bestowed for a purpose and confront the overwhelming darkness she fears.

Gabriel is a Seraph, a guardian angel sent in the mortal body of a sixteen-year-old boy to protect Alex at the time in her life when she needs it most. Although he is as old as time, Gabriel’s teenage form reacts to Alex in an unexpected, unprecedented way. He falls hopelessly in love with her.

When their school erupts in violence, Gabriel and Alex realize why the guardian was sent. But can they rise above human emotions to fulfill their destinies, even if it means the outcome will rip their fragile world apart?

Since high school, I have bummed around Europe, learned Italian, found a job that I love, and written three novels for teens.

Things that haven’t changed since high school: my love of punk rock and Mohawks; infatuation with John Hughes films; feeling like I don’t fit in (unfortunately it doesn’t end with high school) and a love affair with Jane Austen.

Things that have changed since high school: love of rollercoasters (not so fun when you get old); having free time; finally knowing what fulfills me as an individual; not caring so much that I don’t fit in.

Reviews of The Halo Chronicles: The Guardian by Carey Corp

I'm hooked on the Halo Chronicles. If you like YA that reads more like adult fiction with young protagonists, you'll enjoy this book. Alex is a well-rounded character with an interesting story to tell, and there's a supporting cast of well-drawn and interesting people.

This is a book you can settle into. There's an intimate feeling about this story--not sex, although there's a respectable amount of UST as you'd see with any story featuring healthy teenagers--but like you're whispering shared secrets with a trusted friend. Gabriel aptly walks the line between powerful supernatural boyfriend and engagingly human--it's nice to see his flaws (and he does have them).

With YA stories, authors too often run the risk of going so deep into a main character's head that they end up becoming melodramatic, and Alex's upbringing has been pretty tough, but she aptly walks the line between acknowledging her pain yet not letting herself wallow in her situation or her past.

Hot supernatural boy meets girl is about as close as this gets to Twilight. Where Twilight was all about a girl moving into her boyfriend's world, THC:The Guardian is about a girl who builds her own world, painstakingly struggling to navigate it relationship by relationship.

Alex builds a fragile and poignant bond with her new foster parents, struggles to begin friendships with other students at her new school, in spite of her isolating circumstances both supernatural and mundane, and wrestles with how the change in her life affects her relationship with her best friend from the foster system. I really felt like she was fighting hard to become better than her fears, and to rise above the things that happened to her to start to take control of her life.

Tech-wise, the formatting was impeccable for my version (Aldiko on an Android smartphone). No weird characters or wonky spacing, no discernible formatting or editing errors, and an enjoyable read all around. I'm looking forward to where this series goes.

It wasn't really mine.
I thought it a bit slow in places and overall possessed by a very dark and brooding atmosphere. There's however a very similar feeling to "twilight" to this story, so that fans of those books may want to give this one a chance, too.

"THE HALO CHRONICLES: THE GUARDIAN" BY CAREY CORP

This book was simply amazing. I am now seeking the rest of the series that I know this book must belong to. Carey Corp is a fantastic writer with the ability to write a story without worrying about taking chances with her characters. (By the way I couldn't help but picture Lucas Till as Gabriel, keep that in mind for a movie deal!) So many authors are afraid if they allow characters that their readers truly love to end up having an outcome that is not such a happy ending that they will lose the interest of their followers. I for one adore writers that are not afraid to put the lives of their characters on the line for the greater good of a story and I feel that Carey Corp is definitely one of these writers.

I would recommend these books for not only teens but adults as well, this story captured me and held me until the very end and I can honestly say Carey Corp has become a favorite of mine from this moment on.

Carey if you read this review know that I would LOVE to read the rest of your series, I am dying to know what happens to Alexia, Derry, and Jonah next!

While the actual heart of the story seems to take a long time coming, the interactions between the main character Alex and those around her was more than enough to keep me interested. Carey Corp does a great job creating this mythology around angels and the difference between good and bad. I really enjoyed reading, (so much so that I put it on my iPhone and brought it around with me so I could read every second I got). She builds strong, fleshed out characters, each with their own definitive personality, and her dialogue is both believable and entertaining. I would without a doubt recommend reading, and I hope there's a second one soon.

You have subscribed to alerts for Carey Corp.

You have been added to Carey Corp's favorite list.

You can also sign-up to receive email notifications whenever Carey Corp releases a new book.