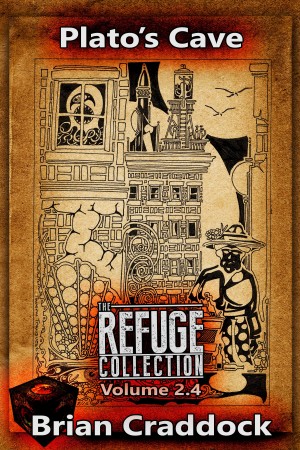 Brian Craddock is the author of Eucalyptus Goth (Oscillate Wildly Press, 2017). The Dalziel Files (Broken Puppet Books, 2018) is his first collection of short stories, many of which were originally published in Steve Dillon's Things in the Well anthologies (Between the Tracks, Below the Stairs, Behind the Mask, Beneath the Waves).

He is also published in Midian Unmade: Tales of Clive Barker’s Nightbreed (Tor Books, 2015), and Book of the Tribes: a Tribute to Clive Barker's Nightbreed (OzHorrorCon, 2013). His essay on Clive Barker appears in The Body Horror Book (Oscillate Wildly Press, 2017).

Brian has also written for the puppet webseries The Hobble & Snitch Show (2015/2016), wherein he directed and performed.

Well, this was an interesting one. A gritty story, it gets wonderfully odd about half way through, culminating in a completely unexpected way. Looking back, I'm not sure who knew the truth when, if at all, but it's a great read.

Plato's Cave by Brian Craddock is an intriguing insight into the Refuge Collection series. It's wonderfully quirky take on the different personalities found within Refuge provide for an excellent read. The detail and description used by Brian illustrates a violent yet fascinating take on Refuge.

In this tale from the Refuge Collection, Brian Craddock follows Marty the 'bruiser' Hayseed, first encountered in The Thief's Tale. Not content to be the mayor's lackey forever, Marty's got his hands on something which could tip the scales... Irreverent, violent, and compelling, Plato's Cave teases the threads of Refuge and uncovers yet another dimension...

You have subscribed to Smashwords Alerts new release notifications for Brian Craddock.

You have been added to Brian Craddock's favorite list.

You can also sign-up to receive email notifications whenever Brian Craddock releases a new book.