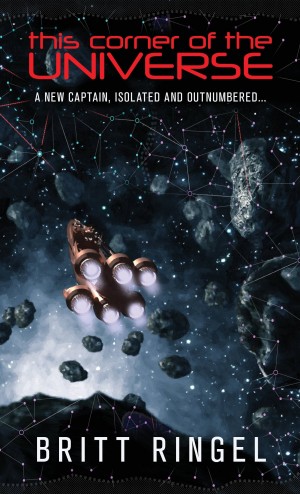 This Corner of the Universe

By Britt Ringel
Rated 4.71/5 based on 7 reviews
When Anelace is sent to investigate accidents plaguing mining operations in a remote star system, Captain Garrett Heskan suspects more than random mishaps are in play. As the mystery unfolds, the stakes turn deadly in a race to expose the true threat while protecting the civilians in the system. Heskan's first command could be his last, as Anelace is outnumbered in her fight for survival. More
The mission of BRS Anelace was supposed to be simple and uneventful…

When Anelace is sent to investigate the accidents plaguing mining operations in a remote star system, Captain Garrett Heskan and his officers soon suspect more than random mishaps are in play. As clues to the mystery unfold, the stakes quickly turn deadly in a cat-and-mouse game to expose the true threat while protecting the civilian miners in the system. Heskan's first command could be his last, as Anelace is outnumbered and outgunned in her fight for survival.

This is Book 1 of the This Corner of the Universe science fiction series. Get to know the crew of Anelace, as this ongoing series explores the careers and lives of this family of characters in the face of political turmoil, fallible leaders and emerging technologies.
Available ebook formats: epub mobi pdf lrf html
First 20% Sample: epub mobi (Kindle) lrf Online Reader
Price: $0.99 USD
Buy Add to Library Give as a Gift
How gifting works
Create Widget
Tags: series space battles scifi series space navy space fleet age of sail first command milscifi
About Britt Ringel

Britt Ringel has been a windsurfing instructor, Air Force captain, attorney, and teacher, but his passion is building galaxies and the characters who inhabit them. When not writing, or reading, he enjoys military documentaries, building model ships, and spoiling his golden retriever, Jengo.

About the Series: This Corner of the Universe (TCOTU)

Five books tell the story of Captain Garrett Heskan and the original crew of Anelace as they struggle through military conflict and political turmoil to find their way home.

Also in Series: This Corner of the Universe (TCOTU)

Reviews of This Corner of the Universe by Britt Ringel

Six stars. I am surprised Ringel was an Air Force captain; I totally expected him to be a USN lieutenant. The book has captured the operation of a naval vessel in intricate detail, and described grueling battles in intricate detail. And instead of like in an idiotic Arnold Swarzenegger movie where he always wins against incredible odds, and nobody dies, Ringel realistically has heart rending casualties in the story. And, of course, in true military fashion, he includes face-palming military stupidity, without which the book would be incredibly lacking.

Great story! It keeps your interest and offers real action.

A good read. Enjoyed it.

E-book-Readers know that in the first part of a Space Opera, authors need to present persons, vessels, star systems and the whole universe, especially if it's a serie's start. The author has invested an incredible amout of details, and it is visible in the first pages. In this novel, it takes around 100 pages but is not too boring. And it pays out to read. Readers are enabled to follow the SF action. It gets unbearable dramatic. Britt has published one of the most exciting space battle scenes of SF history, almost comparable to "Footfall" from Larry Niven!

This was an excellent read. Action packed. I really enjoyed it.

A wonderful science fiction adventure. I was hooked from the beginning to the end. Very detailed, very realistic, with a large emphasis on military action and how we can expect war into space to happen.

You have subscribed to Smashwords Alerts new release notifications for Britt Ringel.

You have been added to Britt Ringel's favorite list.

You can also sign-up to receive email notifications whenever Britt Ringel releases a new book.