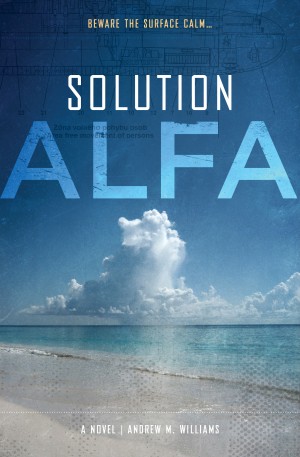 Influenced at an early age by Dr Seuss and the masterpieces of Goscinny and Uderzo, Williams alleviated boredom and amused classmates through high-school by writing, and drawing caricatures of teachers, students and anyone else he could outrun. After six enormously satisfying years in university, he surprised everyone by graduating in 1983 with a BSc in Kinesiology.

Writing took a back seat for the next dozen years, as he opted for the action and adventure of the Royal Canadian Navy. Creativity was limited to the occasional farewell roast of senior naval officers--a valuable experience in the art of skewering a subject diplomatically, thus retaining some prospect of career advancement.
After the Navy he attended MBA school, worked as a cartoonist, became a stockbroker (8 years--great clients), and then realized a long-lost ambition of becoming a writer.

Solution ALFA is the sequel to The Carlyle Deception, and represents book 2 in a trilogy.

You have subscribed to alerts for Andrew M. Williams.

You have been added to Andrew M. Williams's favorite list.

You can also sign-up to receive email notifications whenever Andrew M. Williams releases a new book.