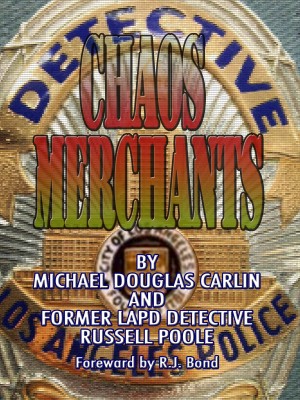 Read about the murders of Tupac Shakur and Christopher Wallace from the archives of Russell Poole. He was afraid the murder books would be gutted when he left the LAPD so he took his files with him. You can now see what was in those files. The murders could have been solved long ago but that would lead to a very bad place for so many involved. Learn the truth that would cost Russell his life. More
Tupac Shakur was murdered in September of 1996 at the age of 25. His killers were never brought to justice and there was little or no investigation. Six months later Biggie Smalls is killed in almost the same fashion with an experience modification. Armor piercing ammunition was used along with a professional shooter. The similarities are striking. Five barricades pin the vehicle and the shooter's vehicle completes the sixth barricade leaving the vehicle nowhere to go. This was a professional hit that led into the halls of the LAPD. Russell Poole, the original investigator of the Wallace murder, would lose his career over these investigations as the brass would push him out of the department. Russell, found out what Snoop Dogg said about Suge Knight being behind the murder of Tupac and he was the one that put that information out publicly. But as he continued to investigate he would find that so many clues pointed toward Death Row Records and there were people inside the record label that were trying to kill Suge Knight and they still are trying to kill him. What Russell uncovered would cost him his life. Russell was silenced to derail the truth. But the truth is seeping up all around us and cannot be stopped. Chaos Merchants is the reason Russell Poole was killed.
Available ebook formats: epub mobi pdf lrf pdb txt html
First 9% Sample: mobi (Kindle) lrf pdb Online Reader
Price: $2.99 USD
Buy Add to Library Give as a Gift
How gifting works
Create Widget
Tags: 2pac tupac biggie smalls tupac shakur notorious big michael douglas carlin christoper wallace notorious big murder russell poole tupac murder
About Michael Douglas Carlin

"Our work will not be finished until every man, woman, and child alive has three square meals a day, a roof over their heads, access to quality health care, personal security, an education and a job." - Michael Douglas Carlin

It all began with the book "A Prescription For Peace" continued with "Peaceful Protests" and is developed further in "Rise a Knight." What if a billion people took an oath never to discriminate against any human for any reason? The world would be a better place for all of us. Rise a Knight empowers people everywhere to live a life of service. In the pages of Carlin's books you will find essays about the nuts and bolts of how we can have peace on earth.

You can follow Michael Carlin into Border Mexico in the documentary film, American Federale, about the only American ever to serve as a Mexican Federale. The film is available on iTunes, Amazon, and GooglePlay.

Recently Carlin spent two years with former LAPD Homicide Detective Russell Poole investigating the murders of Tupac Shakur and Biggie Smalls. Russell, R.J. Bond, and Carlin wrote Tupac:187 an encyclopedia about the murders. Russell and Carlin continued to distill the information with the attempt to get law enforcement on board with reopening the cases. What they created can be seen in Chaos Merchants. Carlin set up a meeting through Sheriff Jim McDonnell for Russell to meet with a homicide investigator at the Los Angeles County Sheriff's Department. Poole and Carlin had uncovered some disturbing information related to the cases that implicated one or more of the Sheriff's in a related attempted murder. Poole felt that reopening the Tupac and Biggie cases would make the Sheriff's shine and avoid embarrassment. When Poole showed up to the meeting he was confronted by investigators into the attempted murder instead of just the promised homicide investigator interested in reopening the cases. Mysteriously Poole suffered a massive heart attack in the meeting and perished before he left the room. Learn what Poole and Carlin discovered in Chaos Merchants that cost Russell Poole his life.

You can reach Michael Carlin at MichaelDouglasCarlin@gmail.com

You have subscribed to Smashwords Alerts new release notifications for Michael Douglas Carlin.

You have been added to Michael Douglas Carlin's favorite list.

You can also sign-up to receive email notifications whenever Michael Douglas Carlin releases a new book.