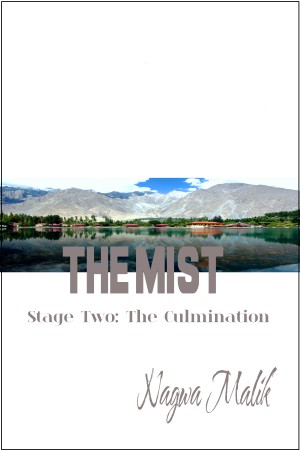 By Nagwa Malik
Rated 4.60/5 based on 5 reviews
The future has already come and what was fiction is now a reality- politics is not just politics and everyone is effected even if one doesn't want to be: is the global mass uniting under corporate governments? Can Pakistan still save itself or is it too late? More
The Mist is a two-part series about a black-ops Pakistani agent, Tanya, whose main mission these past years has been to prove and identify the root cause of the war on terror, and to curb the damage that could follow, enveloping other countries into a needless and senseless war, at the same time to work on exposing as much as can be on the truth behind the war. More importantly, her job is to help steer Pakistan clear of this war, and to help Pakistan stay in a position where it can evade pressure on both internal and external fronts to maintain its peace both within and out of the region.
For the first time in years, Tanya feels a crisis of faith, a despair that it will all come to nothing and she fears she may end up being like the enemies she is fighting. She also fears for Burke, her childhood friend and a CIA operative helping her expose unwanted truths putting his own career and even life in danger.
Told in at least three English dialects, The Mist series lets the readers not only travel with the characters to different parts of the world, and experience their culture, but also allows them to speak the speak and be a part of the characters’ own environments first hand.
Available ebook formats: epub mobi pdf lrf pdb txt html
First 15% Sample: epub mobi (Kindle) lrf more Online Reader
pdb
Price: $4.99 USD
Buy Add to Library Give as a Gift
How gifting works
Create Widget
Tags: crime conspiracy theory political conspiracy freemasonry occult adult theme politics and faith politics and murder politics afghanistan pakistan saudi arabia usa politics and action conspiracy novel politics and current affairs crime action death suspense thrillers vengeance betrayal conspiracy espionage
About Nagwa Malik

Nagwa has been telling stories for as long as she remembers. At bedtime, the two sisters would have a tradition of making up or adding to the adventures of the ladybird series “Peter and Jane”, which then led to creating and telling original stories. It was only natural, perhaps, that she would graduate into writing stories later on.
Nagwa Malik, born in Gumel, Nigeria and having spent her childhood between the UK and Nigeria, shifted to Pakistan her home country, still a young child where she is now a Language and Communication Skills Instructor, working mainly with professionals. Before that she used to teach French and Script-writing at reputed Schools and Universities. She is a double Masters' degree holder (French and Script-writing respectively) having obtained the second Master’s degree from City University, London with honours. Her Master’s in French was obtained from the University of the Punjab in which she passed as a position holder aged 20.
Nagwa has been writing since she was 11 and published her first novel at the age of 15 which was a success. She has written a total of 40 plus novels but has been focused-until now- on her studies and later her career as a writer/producer and teacher putting her publications on hold. Apart from that she has written articles for Newspapers like The News International.

Now that the sober account of her has been done with, a little bit about the person: Nagwa considers life to be lived as a traveller and is an ambivert who loves nature, animals, travelling, languages (she has a flair for grasping new languages very quickly) and, last but not least, her solitude. When she is not writing, she rejuvenates herself by watching her favourite K, J, C and Thai dramas...Korean being her favourite as they were what "brought back the spark" in her life, especially creative.

To read her interview on Express Tribune please check this ink:
http://tribune.com.pk/story/622538/opportune-storytelling-of-fact-fiction-and-fable/

Paperbacks can be ordered from Amazon, Createspace and Barnes and Noble.

BOOK TRAILER
Depicting what real people think about the subjects covered in the book...it is like looking at a live collage of people in different parts of the world sharing their thoughts and opinions on what is going on in their parts of the world...is it similar to your part of the world?Are we human beings different from each other due to our race, ethnicity and cultures? Or are our issues the same?

About the Series: The Mist

The Mist Stage One is the first of a two-part series in which Tanya, the Pakistani black ops agent, works both in and out of her country to find the source behind terrorism, and to steer Pakistan clear of this ongoing war so that Pakistan could once again re-secure itself and its sovereignty.

Also in Series: The Mist

Reviews of The Mist Stage Two: The Culmination (second edition) by Nagwa Malik

"The Mist - Stage Two" is the continuation of the Tanya's journey to put an end to the political instability and her encounter with Burke and their contrasting approaches towards solving the issue and how both of them end up with rediscovering themselves and coping with each other's differences. The author is able to really add a lot of passion and feeling to the characters.

This reading has forced me to say Nagwa keep thrilling your readers by writing more books like this.

In the second part of her series, author Nagwa Malik has outdone herself. In the first book, The Mist - Stage One: The prelude, Ms Malik established an elaborate and all too believable series of events and characters. We were introduced to the movers and shakers of the world, the people who pull the strings from behind the scenes. In the second book, we return to those characters and situations and this time, the story is better and becomes more intricate.
The valiant protagonist of the series, Tanya, is starting to lose faith in the institutions and authorities that she had been serving so loyally. However, she knows that the most important thing is to defuse a war between Pakistan and the enemies of Pakistan. She attempts to work through her confusion and doubts in order to avert impending war. It becomes a race against time as she tries to resolve the various problems all leading to the war.
If you haven't read the first book yet, go read it and then read this one. This two part story is a breath of fresh air in the spy genre as it does not stick to the old and tired stereotypes that plague most modern spy fiction. This story gives and honest and humane look at all sides of the war on terror and it is up to the reader to judge the characters.

Enlightening. If you want to get a perspective that will break apart your preconceived notions of important themes for today like the 'war on terror' in a most helpful and healthy way, then please read this.

Gripping, fascinating and skillfully crafted. A must read!

You have subscribed to alerts for Nagwa Malik.

You have been added to Nagwa Malik's favorite list.

You can also sign-up to receive email notifications whenever Nagwa Malik releases a new book.