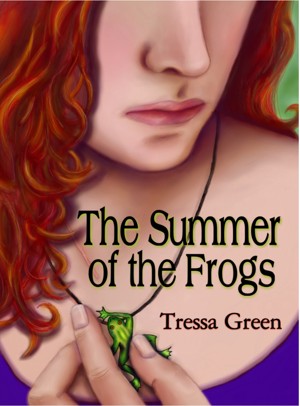 The Summer of the Frogs

By Tressa Green
Rated 5.00/5 based on 1 review
Attacked and nearly killed by a creature from another realm, Claire's senses are opened to the kaleidoscope world beyond the visible.

As she struggles to overcome the chaos, she's diagnosed as psychotic and ostracized by nearly everyone, except two: the awkward young man from the clinic whose sparkling eyes she can't seem to forget and the mysterious, shadowy man sent to kill her. More
Attacked and nearly killed by a creature from another realm, Claire's senses are opened to the kaleidoscope world beyond the visible.

As she struggles to overcome the chaos, she's diagnosed as psychotic and ostracized by nearly everyone, except two: the awkward young man from the clinic whose sparkling eyes she can't seem to forget and the mysterious, shadowy man sent to kill her.

Seeking to come to terms with her new awareness, Claire discovers a plot that goes deeper than imaginable and must rely on her new friends to unravel the mystery that crosses dimensions.

"A phenomenal first book from a very talented writer. I couldn't put it down. It was a wonderful mix of "Girl, Interrupted" meets "Alice in Wonderland". If this first book is an indication of what is to come, I can only eagerly wait to see what else Ms. Green can come up with" -- 5 star review on Amazon
Available ebook formats: epub mobi pdf lrf pdb txt html
First 20% Sample: epub mobi (Kindle) lrf more Online Reader
pdb
Price: $1.29 USD
Buy Add to Library Give as a Gift
How gifting works
Create Widget
Tags: fiction mental illness memoir woman diary alternate reality alternate worlds general general fiction character fiction book fiction novel psychotic woman
About Tressa Green

Tressa Green is the author of The Summer of the Frogs and Fragile Bones. (Read more reviews for both on Amazon.) The second novel in the seasons series, The Fall of the Cicadas, is finished and in beta; publication is planned for Fall of 2020. The third, The Winter of the Birds, is 3/4 finished with a tentative Winter 2020-21 publication. A companion novel to Fragile Bones is the works, as well as a new novel (working title- You from Adam).

As well as having a passion for the written word, she is also an award winning pencil artist. Tressa currently resides as a full time writer in the temperamental clime of North-central Indiana along with her husband, two of three children, (the oldest is grown), and a clutter of feisty felines.

Reviews of The Summer of the Frogs by Tressa Green

This review is late in arriving. I bought The Summer of Frogs a while back, but—as is often the case with me—I was not ready to read a novel of this sort. I will explain that.

The Summer of Frogs is a veritable cloud of uncertainties with a bright ray of sunshine somewhere above the overcast sky. You can feel the glow as you read the novel. This is a first person story about a young woman with problems; most would say mental problems, possibly schizophrenic. One wonders, throughout the telling, if anything Claire experiences is real or not. Her problems start after she suffers a dog attack, but the dog may not have been a dog at all. It could have been something otherworldly. Then, while raving in her bedroom, bleeding from self-mutilation, Claire meets a man, Tommy, who may have arrived to finish her existence. But he doesn't.

The title is almost a red herring until you look at the book cover again after reading a certain small anecdote the protagonist relates about a park filled with artisans. The cover is art by the author. It's absolutely beautiful. I never fail to stare at it. And now attach this conception of artistry to the prose. That's Tressa Green's gift: imagery, some of which is pure poetry.

Ok, back to not being able to read this for a few months: it's mostly because I'm a rather linear sort of reader/writer and tend to choose action-filled novels, but The Summer of Frogs is a cloud of events. The author can leave you wandering in that cloud (which, I remind you, has a glow from that hidden ray of sunlight) and while you're in the cloud wandering, you're often musing on what you should think about the latest thing Claire said. You keep reading, thinking you'll figure Claire out later, but you once more end up pondering truths after the author skillfully leads you to believe in Claire's sanity again, and all throughout, there is this poetic imagery.

While reading it, I started thinking of this cloud as a soft sort of coral with branches leading off. Claire tends to branch at random, but one always comes back to that bright main trunk again. This story is as much about accepting loss of control as it is about anything else. And you can feel that loss of control. You can see Claire being selfish and then generous, blind and then radiant. She's really fractal. But that main trunk of story draws you back inward, the story about Claire and Tommy and whether their relationship—a strange composite of fear, love, closeness, dependence and independence—can survive their enemies.

Keep doing what you do, Tressa—and get better at the punctuation and grammar. :-) Well done, you. Once I finally picked the story up for a proper read, digested it all in a day. Awesome cloud!

P.S. Would have given Tressa a four out of five for the story, but you know, the cover. Really beautiful.

You have subscribed to alerts for Tressa Green.

You have been added to Tressa Green's favorite list.

You can also sign-up to receive email notifications whenever Tressa Green releases a new book.