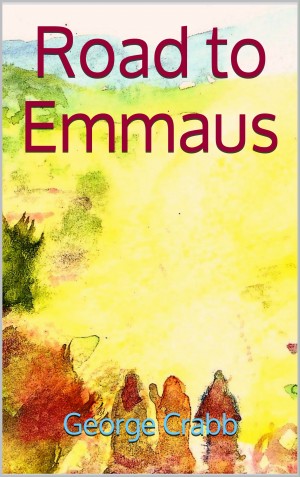 By George Crabb
Imagine walking with Jesus as he illustrates where his story is told in the Old Testament scriptures. The Bible tells of these two men listening to him for seven miles on their way from Jerusalem to the village of Emmaus. As they walked along listening to him, their heart's burned with goodness. Perhaps as you read this book and see the pictures of Jesus your heart will burn as well. More
The place was Jerusalem and the year was 32 c.e. It was three days after the Passover festival and the first day of the week. Two men were beginning their two hour walk back to their home town of Emmaus. They were sad because only three days earlier their leader named Jesus, who was their teacher and their hope for the future was killed.

As they walked along with their faces long and depressed, they were interrupted by a strange man who asked them, "Why are you two so sad?"

Not knowing that this was Jesus walking with them, they yelled out at him, "Are you a the only stranger in Jerusalem, and don't you know happened a few days ago?"

He said to them, "What things?"

So they said to him, "The things concerning Jesus of Nazareth, who was a Prophet mighty in deed and word before God and all the people, and how the chief priests and our rulers condemned him to death, and crucified him. But we were hoping that it was he who was going to redeem Israel. Besides all this, today is the third day since these things happened. Yes, and certain women of our company who arrived at the tomb early today, astonished us. When they did not find his body they came to us saying that they had also seen a vision of angels who said he was alive. And two of the men in our group went to the tomb and found it just as the women had said; but him they did not see."

Then the "Stranger" who was Jesus disguising his identity said to them, "O foolish ones, and slow of heart to believe in all that the prophets have spoken! Wasn't the the Messiah, the Christ to have suffered these things and to enter into his glory?"

So beginning at the books of Moses - Genesis, Exodus, Leviticus, Numbers, Deuteronomy and all of the books of the Prophets, he explained to them in all the Scriptures the things concerning himself.

Then it was recorded that their hearts burned within them after he had revealed that he was Jesus and left the two men. They understood clearly and realized that the burning in their hearts was the great warm love of the creator filling their souls with his loving kindness and tender mercies.

So come along on this narrative of a book and see Jesus' story displayed through the entire Old Testament Bible.

Perhaps as you read and see this narrative displayed you too will see the pictures of Jesus and your heart and soul will burn with the goodness of God. As you get to know Jesus clearer than ever before it may be like driving up into the mountains and out of the fog. Like seeing the mountain range and breathing in the fresh, clear, crisp and clean air for the first time.

So come along and join Jesus walking with him on the Road to Emmaus. May your heart burn with him as well.

George was born in Santa Cruz, California and raised by a loving mother and father who are followers Jesus. They taught him the bible from his earliest years. He was raised in a large ministry that helped people right off of the street with drug problems. His family became an outreach in Albuquerque, New Mexico in 1979. He was 9 years old when they moved there and by the time he was 11 years old he began to get into a lot of trouble.

He attended Calvary Albuquerque when it started in 1982. It was during that time that "Seeds" were being planted by hearing the Word of God taught by Pastor Skip Heitzig.

It was a year later in Tucson, Arizona that he gave his life to Jesus and was "Born Again".

His family moved back to Santa Cruz when he was 14 and he became an avid surfer. Surfing became his life and slowly he drifted away from close relationship with Jesus.

At twenty-one years old he knew that living to surf was a dead end. So he volunteered to become an Army Ranger. During this time in the Rangers he learned how to be a man. Though he learned much he was still a lost son to God. The party life was everything until he met the love of his life, Christina. Later they married and they moved back to his home town of Santa Cruz.

His wife, work and surfing was his priority until they had their first child in 2002. Later they decided that it would be better to raise their son in Washington State. He started to go to church again and turn back toward the Lord.

It was a men's conference at Calvary Fellowship in Seattle that he re committed his life to Jesus. Greg Laurie was preaching and he felt the touch in his heart of the Holy Spirit to stand up for the prayer of re dedication.

Since that time he began to teach and preach at his local Calvary Chapel and his first teaching was on Old Testament Joseph. He turned this teaching into a book. Then other Sunday sermons and Wednesday night teachings became books.

He became an elder and a men's ministry leader in the church.

He has since then stepped down as elder and is focused on his marriage and raising his two boys while writing books that glorify Jesus Christ.

You have subscribed to alerts for George Crabb.

You have been added to George Crabb's favorite list.

You can also sign-up to receive email notifications whenever George Crabb releases a new book.