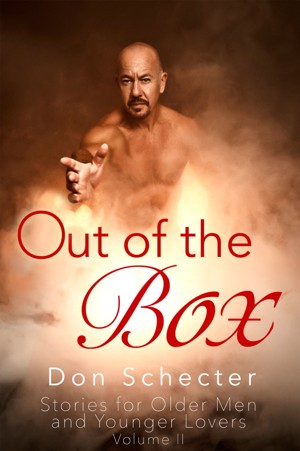 Out of the Box

Each of these 16 stories is written in a different rhythm. Some are happy, some thought-provoking, some highly erotic: all will hold your interest. OUT OF THE BOX presents the gay experience as exciting and memorable fiction. More
When Larry comes out, he finds gay romance requires new and different skills. Tate repeats the same mistakes in each affair. A gay and a lesbian couple conceive a child. Eddie introduces his mailman to sex. Gary shows an older man a new approach to sex. Dennis wonders if there’s life after death. Lanny pursues a younger man in a nudist club. Brett races time to ensure the birth of his gay son. Louis and Neil fall in love on the dance floor. Sam sees his optometrist for glasses and sex. Russ seeks answers from their doctor after his lover dies. The son of gay dads worries he might be gay as well. An older man shadows a hot youngster at his gym. Blake must deal with his attraction to one of his straight employees. Conny immerses himself in the world of S&M. A couple tries bondage to spice up their lovemaking.
Available ebook formats: epub mobi pdf lrf pdb txt html
First 10% Sample: epub mobi (Kindle) lrf more Online Reader
pdb
Price: $2.99 USD
Buy Add to Library Give as a Gift
How gifting works
Create Widget
Tags: romance erotica fantasy bdsm mature themes graphic sex gay short stories unusual twists masterslave relationship maydecember erotica
About Don Schecter

About the Series: Stories for Older Men & Their Younger Lovers

Thrilling tales of gay life featuring a variety of lovers in exciting and unusual situations. Both humorous and serious, these stories run the gamut of sex, vanilla or kinky; true love; marriage; and death, by natural causes, suicide or murder. Each story is designed to intrigue.

Also in Series: Stories for Older Men & Their Younger Lovers

Reviews of Out of the Box by Don Schecter

You have subscribed to Smashwords Alerts new release notifications for Don Schecter.