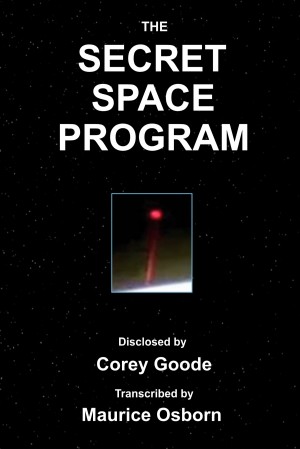 By Maurice Osborn
The information presented includes a description of Corey Goode’s involvement in a secret space program, secret discoveries that have been kept from humanity, historical facts of recent human developments, evaluations of our current situation, and perspectives on the future of mankind. Benevolent alien races have stated that it is now time for humanity to become aware of this information. More
Corey Goode has worked for over 20 years in the Secret Space Program and he fulfilled his involvement with that program in 1987. He is now involved once again after being contacted by an Alliance group that seeks public disclosures about this program. Corey Goode is from Texas and is now disclosing information about a secret government space program. He has given up a high paying job for this undertaking and is the loving parent of two children.

Corey has revealed his personal knowledge about the secret industrialization of our solar system and beyond with David Wilcock as the host of a series of videotaped interviews presented on a show titled “Cosmic Disclosure”. My name is Maurice Osborn. I have been researching, writing, and lecturing about the UFO phenomenon for over thirty years. But, after listening to what Corey Goode has had to say about his own personal knowledge regarding this subject, I came to realize how little that I actually knew and how much more information that he was presenting to humanity. I consider this information to be so important that I have transcribed everything in this book and organized it for easy access.
Download: epub mobi (Kindle) pdf more Online Reader
lrf pdb txt
Price: Free! USD
Add to Library
Create Widget
Tags: ufo secret history ufology ufo disclosure secret knowledge ufo alien ufo conspiracy ufo and aliens blue avians
About Maurice Osborn

About the Series: Secret Space Programs

This series of books begins with the SECRET SPACE PROGRAM, which covers everything that was revealed in the first two seasons of the "Cosmic Disclosure" program over the gaia.com website. But, the DEEPER DISCLOSURES book provides everything that has been disclosed since then.

Reviews of The Secret Space Program by Maurice Osborn

You have subscribed to alerts for Maurice Osborn.