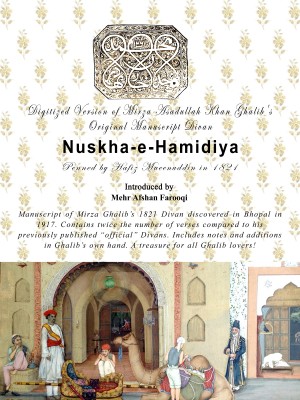 By Mirza Asadullah Khan Ghalib
Manuscript of Mirza Ghalib’s 1821 Divan discovered in Bhopal in 1917. Contains twice the number of verses compared to his previously published “official” Divans. Includes notes and additions in Ghalib’s own hand. Your chance to rediscover Mirza Ghalib through his "unknown" Ghazals contained in this manuscript which was Ghalib's personal copy for over a decade. A treasure for all Ghalib lovers! More
Digital copy of the Ghalib's original manuscript Divan the Nuskha-e-Hamidiyya with introduction by prominent Ghalib scholar Dr. Mehr Afshan Farooqi. Contains over twice the number of verses compared to Ghalib's "official" Diwan and many handwritten notes never seen before. This manuscript was Ghalib's personal copy and was in his possession for at least twelve years!

"In 1918, some fifty years after Ghalib’s death, a manuscript was discovered in the Hamidiyya Library in the princely state of Bhopal that was beyond doubt a Divan of the great poet. The colophon revealed that it had been calligraphed (in 1237 hijri, corresponds to1821CE) by Hafiz Mueenuddin. The manuscript or nuskha (as we call it in Urdu) was written in a pleasing hand and the text enclosed with red, gold and blue margins. Unlike the general practice of beginning a Divan with a ghazal, this Nuskha begins with a qita’ in Farsi followed by two qasidahs in Urdu. The page marking the first ghazal, the famous, naqsh faryadi hai kiski shokhi-e tahrir ka, is elaborately embellished with gold and blue.

Ghalib had composed much more than the 1800 verses presented in the mutadavil (official) Divan. The discovery of the Nuskha –e Hamidiyya was phenomenal in that it revealed a large number of verses that were not included in Ghalib’s Divan! Of the 1900 verses that were presented in the Hamidiyya, only 700 had ever been included in the Divan. Of the 1900 verses, 1883 are from ghazals.

According to Maulana Arshi, the Nuskha was prepared for Ghalib’s personal use. It was given away most likely to a shagird after another copy had been made. It is possible that after Ghalib had made selections for Gul-ra’na (1828), he gave away this Nuskha. It is also possible that he had got another copy made (Nuskha-e Sherani, 1826) for safekeeping while he journeyed to Calcutta with the Nuskha-e Hamidiyya.

One of the controversial features of the Nuskha is the addition of ghazals in the margins in a consistent but somewhat unpolished hand. The question is: Who made those additions? Maulana Arshi is of the opinion that the writing is in Ghalib’s hand. Some scholars think the handwriting is not sophisticated enough to be Ghalib’s.

According to Gyan Chand Jain, the corrections and additions to the Hamidiyya were done after the circulation of the Nuskha –e Sherani and are not in Ghalib’s hand. New ghazals and verses added to older ghazals were copied from the Sherani in the margins of the Hamidiyya.

The Nuskha was last seen by Maulana Arshi in 1944. In the tumultuous events of India’s Partition, the original Nuskha was lost. What is currently available in print is Hamid Khan sahib’s 1969 edition that was assembled with the help of notes that the latter took in 1938, along with Mufti Anvarul Haq’s edition and the Nuskha-e Sherani.

The re-appearance of the original Nuskha-e Hamidiyya after nearly 75 years is a momentous event for Ghalibians all over the world.."

Mirza Asadullah Khan Ghalib is undoubtedly considered as the most exalted of all Urdu poets. However nearly all of Ghalib's readers have been exposed only to his verses published in his "official" divan and, paradoxically, nearly half of his original verses have been hidden from public view.

Dr. Mehr Afshan Farooqi, a prominent Ghalib scholar and some other scholars have been researching Ghalib's "unknown" verses but no real attempt has been made to bring these hidden treasures out into the public domain. The publication of Nuskha-e-Hamidiya is likely to change the way Ghalib's fans look at his poetry - with twice as many verses to ponder upon compared to his official Divan.

Dr. Farooqi gives us a detailed account of the research she has conducted on Ghalib's first discovered manuscript called the Nuskha-e-Hamidiya which is included verbatim in digital form in this publication.

You have subscribed to alerts for Mirza Asadullah Khan Ghalib.

Would you like to favorite Mirza Asadullah Khan Ghalib?

You have been added to Mirza Asadullah Khan Ghalib's favorite list.