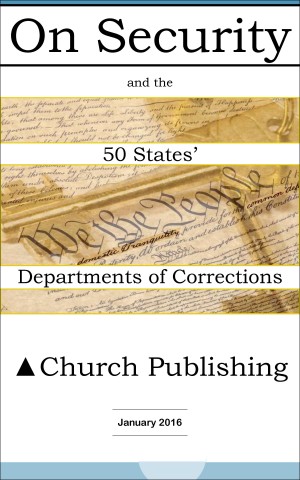 On Security and the 50 States' Departments of Corrections

By Church Publishing
Answering 'what is security' will keep readers thinking until concluding terrorism’s not new, police began billing governments in 1800, and 60 billion is grand for a new Cabinet not providing global security nor doing police work. "On Security and 50 States' Departments of Corrections" details expenditure on prisons for Justice Officials, non-profits applying research in criminology, and Congress. More
The question 'What is security' appears simple but answers will keep readers, academics, and reporters thinking throughout this 11-paged investigation. This non-fiction work’s added 2-paged conclusion leads Politicians to realize terrorism is not new, that police only began getting paid by government in 1800 and 60 billion dollars is too great an amount to expend annually on the new U.S. Cabinet of Homeland Security which neither provides global security nor performs police work.

"On Security and the 50 States' Departments of Corrections" also includes an additional 4-page insert detailing U.S. expenditure on prisons. That report may be noted by U.S. Department of Justice Officials, non-profits applying research to practice in criminal justice, and Congressional policy-makers controlling purse-strings.

In all this 41-page work contains over 225 in-text research citations with complete bibliographic material and links their sources of information. It also includes several images, tables, and charts on security including a Praetorian Guard statue plus a listing of federal agencies employing personnel with arrest and firearm authority.

Although undefined within, this research prompted submission of a Freedom of Information Act request to The U.S. Department of Homeland Security's Office of Intelligence and Analysis August 11, 2014 seeking definition of 'Pursuit Lead Cable' which arises as part of the paper's taxpayer cost-benefit review, cited in two DHS Secretaries' ' "Budget-in-Briefs" across fiscal years 2014-2015 as 'Pursuit Cables' and 'Pursuit Lead Cables.' Seventeen months later ▲Church has not received 187 pages of documents referencing cables purportedly disseminated to the Intelligence Community by a U.S. Department of Homeland Security after information was denied on the basis of protecting intelligence sources under the National Security Act of 1947. This company has not filed a complaint in U.S. District Court to order the release of documents pertaining to 'Pursuit Cable' since The Department of Homeland Security illegally tolled time provisions violating 5 U.S.C. 552 as amended by Public Law 110-175 and won't return email or telephone inquiries seeking determination of Church Publishing's appeal.

Founded in 2011 when Church joined forces with author Cosmo Starlight, creator of Noodle Church, to produce serial *Church, The Television Show,* upon publishing Starlight&#39;s first novel *Freedom Incorporated* in 2012 the house since published its second author Ethan Collins in ‘13. In 2014 the Company began publishing non-fiction with *White Paper on Security* and *50 States&#39; Departments of Corrections.*

▲Church is expanding genres, formats, and distribution in 2015 and has two new novels in its pipeline including *Freedom Afrika* and *Do Not Mix with Alcohol.* It is accepting author submissions so check Church&#39;s website often!

You have subscribed to alerts for Church Publishing.

You have been added to Church Publishing's favorite list.

You can also sign-up to receive email notifications whenever Church Publishing releases a new book.