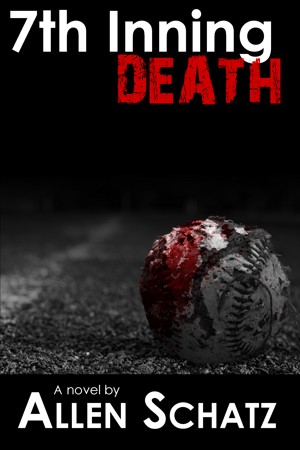 By Allen Schatz
Rated 4.25/5 based on 4 reviews
Major league baseball umpire Marshall Connors longs for a return to the relative obscurity of his profession and the simplicity of the game he loves. A new relationship gives him hope. A old acquaintance takes it away. Because...

BOOK 2 in the MARSHALL CONNORS SERIES More
Major league baseball umpire Marshall Connors is trying to regroup and get his life back to something resembling normal. After surviving the wrath of a psychotic revenge-hungry killer during the most recent World Series, Marshall wants nothing more than a return to the relative obscurity of his profession and the simplicity of the game he loves, all while nurturing a new relationship.

Former FBI agent John King isn’t really a bad person, but a few loose wires make him seem that way. He, too, is looking for normalcy, but disgraced and fired by the FBI, King must battle through a hoard of personal demons to get there. A new job gives him hope, but the struggles grow when King discovers another monster, one more vicious and dangerous than those in his head.

Before the walls of his world collapse completely, King makes a last desperate attempt for salvation, leading him once again into Marshall's life. The collision leaves the umpire in the middle of another game he would rather not play.

With the help of his best friend, Thomas Hillsborough--ex-CIA spy--Marshall can only hope a solution arrives in time.

The ability to create something from nothing is probably what I enjoy most about writing. There are no restrictions to hold you back. If you can imagine it, you can include it in your story.

I can’t sew with a needle and thread very well, but I can weave with my words. My ultimate goal is to create a fabric others can enjoy. That so many have in such a short time is a pretty cool thing.

Get yours on Smashwords and wherever eBooks are sold.

I found this book a little hard to follow. It felt disjointed to me. There are a lot of main characters and I couldn’t figure out at times which one I was following. Maybe there was just too much going on for me to focus on any one thing. I recommend trying to consolidate some of those break out portions a little more so we aren’t weaving in and out of several stories at once.

I loved the plot, though and found the ending a great surprise which is always my favorite ending. Once I accepted the character changes and got kind of into the weave of chasing the characters I was more able to follow the storyline.

I’d like to see a rewrite before I highly recommend this book. I just feel that it is too much messing around and not enough story telling. One thing I'd like to mention that I don't normally is the book cover. It is truly one of the greatest covers representing a story I've seen in a while.

Perfect follow up to Game 7:Dead Ball. We got a deeper glimpse into the characters' lives. I cannot wait for the next book in the series.

If you "liked" the first book you will love this second one! It takes you more in depth into the charactor's lives and relationships and as you get to know them a mystery subtletly is forming with murders to follow. Baseball is more in the background in this book. I liked how you were gentley reminded of what happened in the other book and the way its done it could be a stand alone book too. The scenes with the shrink were very well done, it made me think of Tony Soprano on tv and the tense relationship he had with his lady shrink. Written like a pro and a enjoyable read!

Audience will surely appreciate this work. Allen hit another one out of the park. Another page turner - compelling/poignant. This work is definitely worth a read!! Blends concentrically with "Game7 Deadball". Love Suzy - poor King & Garrett :( Very well done, Allen. Look forward to the next project.

You have subscribed to alerts for Allen Schatz.

You have been added to Allen Schatz's favorite list.

You can also sign-up to receive email notifications whenever Allen Schatz releases a new book.