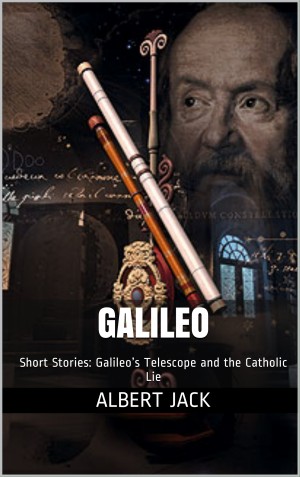 By Albert Jack
From the bestselling author of Red Herrings & White Elephants, Shaggy Dogs, Pop Goes the Weasel, They Laughed at Galileo and many more...

This is the short story of Galileo Galilee and how he has been proved right about everything. More
‘If the world should blow itself up, the last audible voice would be that of an expert saying, ‘It can’t be done.’ – Peter Ustinov

Curiosity will eventually lead to innovation. Fortunately we are an imaginative species who does a lot of wondering. Way back to when man first learned to walk upright and began communicating with each other, by pointing and shouting, we can find the earliest examples. Somebody once thought, ‘I know, we can move that heavy rock, or dead buffalo, by rolling it along on tree trunks because it is easier than dragging it over the ground.’

This, of course, led to the wheel. It must have been around that time that some other clever soul worked out that if he held some meat over that hot fiery thing then it tasted better. It seems basic but it was innovation. Somebody somewhere decided to take the risk of burning their food down into ashes, as they knew the burning logs did, just to see if it tasted any better. But I bet there was someone else laughing at him and saying ‘don’t do that, it’s a terrible idea,’ (or whatever is was they would have said back then.) And that’s innovation too. That’s discovery and invention.

We have been doing it ever since in one form or another and we have come a long way as a species thanks to people who take risks and ignore the advice of wiser ones. And that, in a nutshell, is what this book is all about. You see, that for all of our innovations and invention over the last six thousand years it is incredible to understand that the one thing that has not developed at all is the human brain.

Believe it or not the pre-historic human brain was perfectly capable of understanding how to use Windows 8.1 and could easily have landed a rocket on the moon if only the information it was given was better evolved at the time. The brain itself was already fine and all it needed was programming. That, of course, is what has happened to it over the many years since.

More recently, in 1916 somebody said of the radio, ‘the wireless music box is of no imaginable commercial value. Who would pay for a message sent to nobody in particular?’

Well, that would have been a fair question at then but imagine a world without the radio. And the same was said of the television when it was dismissed as a novelty. ‘American families will not sit around staring at a plywood box for hours at a time.

How wrong can you be?

Albert Jack is an English writer and historian who became something of a publishing phenomenon in 2004 when his first book Red Herrings and White Elephants, which explored the origins of well-known phrases in the English language, became a huge international best-seller. The book was serialised by the Sunday Times for over a year and stayed in the top ten of the UK Sunday Times best-seller list for sixteen months.

His follow up book Shaggy Dogs and Black Sheep was also a best seller and has sold over 150,000 copies since publication in October 2005. It became Penguin Book's Christmas best-seller. His hilarious third book, a study of Urban Legends called Phantom Hitchhikers is also a best-seller and was released in paperback in September 2007. In the same month Red Herrings and White Elephants was re-released for the first time in paperback and Albert has provided 30% more content for a revised and expanded version that is sure to hit the best-seller list once again.

Fascinated by discovering the truth behind the world's great stories, Albert has become an expert in explaining the unexplained, which is great news for conversations and storytellers everywhere.

He is now a veteran of hundreds of live television shows and thousands of radio appearances world-wide. His books have become best-sellers in Great Britain & Europe, America, Canada, South Africa, Australia and translated into many different languages.

In 2007, Albert Jack's Loch Ness Monsters and Raining Frogs, a study of the world's great mysteries from the Bermuda Triangle to the disappearance of Glen Miller. Crop Circles, Loch Ness Monster, UFO's, Marilyn Monroe and the Mary Celeste have also come under investigation along with many more famous stories. Albert uncovers the sometimes surprising truth and his acerbic wit makes for an entertaining read. Loch Ness Monsters was be the third book Albert released in the autumn of 2007 and in March 2009 Random House published the same title in America.

In 2008 Penguin UK released the best-selling Pop Goes the Weasel, Albert's book exploring the dark history and meaning of nursery rhymes that became an instant best-seller and offered the writer new contract to produce two brand new Albert Jack books for release in 2009 and 2010. The first of these, The Old Dog and Duck, Albert's fascinating historic study of the origins of pub and hotel names is due in the shops on September 3rd 2009, closely followed by Penguin USA issuing stateside versions of Pop Goes the Weasel on 6th October and Shaggy Dogs and Black Sheep in March 2010.

In September 2010 What Caesar did for my Salad, Albert's humorous study of our favourite foods reveals who Caesar really was, why sausages are bangers, what the Tartars had to with raw steak why the Thousand Islands developed their seafood sauce and who Margarita was and why she inspired the world's most famous pizza.

Finally, What Caesar Did for my Salad is due for release in America in September 2011, The Old Dog and Duck is released as a paperback in the UK during October 2011, Phantom Hitchhikers Part One and Two are due for release in China in November 2011 and Random House are publishing Albert's brand new UK title, It's a Wonderful Word, on November 3rd 2011. In 2012 Albert re-released Sounds from the Street and published two new books, Money for Old Rope Parts 1 & 2

The success of his books has a lot to do with Albert's invention of what he calls the 'ten minute read,' enabling readers to open his books at any point and be fully entertained for ten minutes at a time before 'going off to do something more productive with their time.' Currently hosting a series of Writer's Workshops in England & South Africa, Albert has plans for another ten hard backs that look set to continue his success for many years to come. Albert is also an accomplished lecturer and after dinner speaker.

You have subscribed to alerts for Albert Jack.

You have been added to Albert Jack's favorite list.

You can also sign-up to receive email notifications whenever Albert Jack releases a new book.