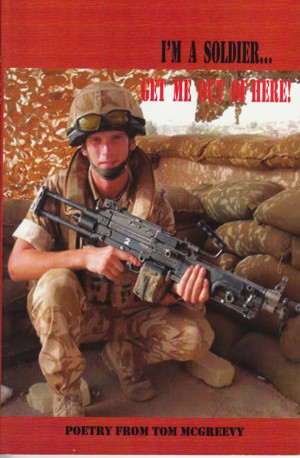 By Tom Mcgreevy
Tom's poetry is Raw,Emotional,Funny,and at times sad enough to bring out the tissues. He always tells it 'Like it is' and it is always from the heart. Tom has this gift of writing from 'Other people's shoes' as well as his own.His life in the Military has inspired many of the Soldier/War poems and his fight against Cancer reflects the sadness and trauma of this terrible illness. 'Warts and all'

Tom is ex-British Armed Forces of 14 years, and operated in such places as Northern Ireland, The Falklands, Germany, France, Cyprus, Denmark, The Jungles of Belize Central America, and Rhodesia/Zimbabwe. Tom is now retired early with Prostate Cancer. ( In remission after Major Surgery ). Now a popular English Writer, Poet.
Tom has published 2 books to date. The first being ' Poems for Paula ' ( June 2008 ), and his latest book: ' I'm a Soldier...get me out of here ! ' ( April 2009 ). Publisher for Tom's Books is ' Rossendale Books UK.
Tom now lives in a small Village in Berkshire, England, with his Wife ' Paula ', and their Disabled Son James.
Tom is also Head Moderator for a Forces Charity: FLOWforALL ( Forces Literary Organisation Worldwide for all )
http://FLOWforALL.org
' I'm a Soldier...get me out of here ! '
my new email address is:
poetryfromtom@btinternet.com

You have subscribed to alerts for Tom Mcgreevy.

You have been added to Tom Mcgreevy's favorite list.

You can also sign-up to receive email notifications whenever Tom Mcgreevy releases a new book.