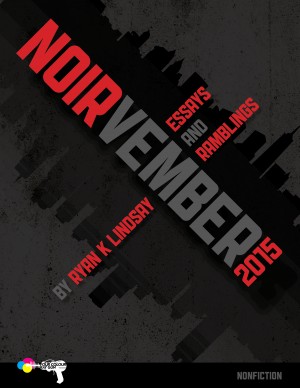 Noirvember 2015 is a series of essays that unpack 30 noir things in style. More
Noirvember 2015 is a series of essays by Ryan K Lindsay about 30 different noir things that interest him. Originally uploaded to his website in a post-a-day format over the month of Noirvember, he aimed to steer clear of the usual classic noir works and instead dove into great comics, mad scientist movies, and the finest of Shakespeare's tragedies.
With a personal tone, and an erratic style, Lindsay lays out his definition of noir and then walks you through these works and ideas in a way that's meaningful to him and that will also connect to you.
If you've ever been interested in noir then you need to slab this book onto your shelf of crime curriculum to pick at over the coming years.
Available ebook formats: epub mobi pdf lrf pdb txt html
First 20% Sample: epub mobi (Kindle) lrf more Online Reader
pdb
Price: $0.99 USD
Buy Add to Library Give as a Gift
How gifting works
Create Widget
Tags: nonfiction crime movies noir essays comics noirvember
About Ryan K Lindsay

He has partnered with artist Sami Kivelä to create: EVERFROST and BEAUTIFUL CANVAS through Black Mask Studios, DEER EDITOR through his own ‘Four Colour Ray Gun’ imprint and a handful of Kickstarter successes, and CHUM through ComixTribe.

His other comics include: Aurealis and Ledger Award winning NEGATIVE SPACE with Owen Gieni through Dark Horse Comics, SHE Vol. 1 with Chris Panda through ComixTribe, GLOVES with Tommy Lee Edwards in the Vertigo CMYK anthology, as well as EIR with Alfie Gallagher, INK ISLAND with Craig Bruyn, STAIN THE SEAS SCARLET with Alex Cormack, and SKYSCRAPER with Mitchell Collins through Kickstarter for ‘Four Colour Ray Gun.’

He was selected as a participant in the DC Writing Workshop group of 2016.

He’s written/edited analytical texts, including THE DEVIL IS IN THE DETAILS: EXAMINING MATT MURDOCK AND DAREDEVIL through Sequart, and has had essays published in Criminal, Godzilla, Sheltered, Strange Nation, Creeper, and Crime Factory.

He is Australian and when not being a family man he hones his writing skills by sacrificing blood wombats to the outback spider fight clubs.

Reviews of Noirvember 2015 - Essays and Ramblings by Ryan K Lindsay

You have subscribed to alerts for Ryan K Lindsay.

You have been added to Ryan K Lindsay's favorite list.

You can also sign-up to receive email notifications whenever Ryan K Lindsay releases a new book.