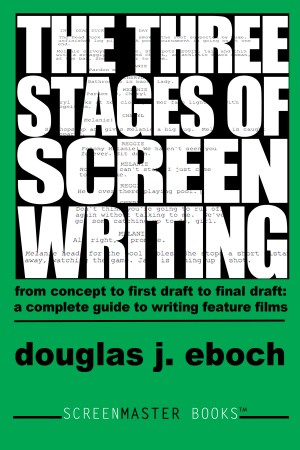 The Three Stages of Screenwriting

“In the crowded field of scriptwriting how-to books, Doug Eboch’s Three Stages of Screenwriting is a standout and a must-read. Why? Three solid reasons: He really, truly knows what he’s talking about. It will help everyone, from novice to pro, become a better writer. And, most impressive of all, it is entertaining as hell - as engaging and fun to read as one of Doug’s scripts.”
-Ross LaManna ("Rush Hour""

"Writers at every stage of development will be delighted Doug wrote this book. I, however, am pissed off. Doug has covered so much so well that it's going to be harder to write one of my own."
-Paul Guay ("Liar, Liar," "Heartbreakers," "Little Rascals")

Douglas J. Eboch is a professional screenwriter and director who wrote the original screenplay for the movie “Sweet Home Alabama” starring Reese Witherspoon, which set a box office record for a September opening. The screenplay began as his Master’s thesis.

Doug also wrote the video game “Nightmare Cove.” He is the author of "The Three Stages of Screenwriting" and co-author, with producer Ken Aguado, of “The Hollywood Pitching Bible: A Practical Guide to Pitching Movies and Television.” The Scriptwriter’s Network awarded him the Carl Sautter Screenwriting Award for Best New Voice in Feature Films. He has a BA in Film Production and an MFA in Screenwriting from the University of Southern California.

You have subscribed to alerts for Douglas J. Eboch.

You have been added to Douglas J. Eboch's favorite list.

You can also sign-up to receive email notifications whenever Douglas J. Eboch releases a new book.