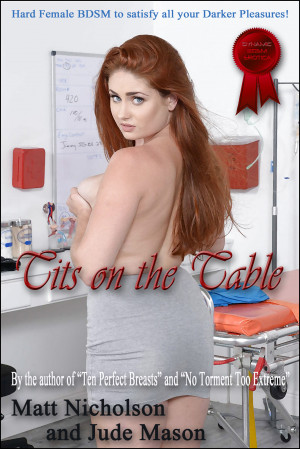 Tits on the Table

In reality, she is way too introverted to become someone’s Anastasia Steele or O. And, though some of deSade’s stories have been her favorites, she is been far too shy to find someone to help her become Justine. But, the more she reads and torments herself, the more she wishes she can find a way to climb out of her shell and live her fantasies like her fictional inspirations did. It isn’t until she finds clandestine sexual enjoyment someplace she would never have expected that she finally decides to act. She just never imagined where that action would lead.

(Editor's Note: This work contains graphic language and sometimes extreme depictions of consensual female bondage and sexual sadomasochism. It is intended for mature audiences only and is not suitable for persons under eighteen years of age.)

Jude Mason has written most of her life, but until she found the Internet in the late 1990's, she’d hidden all the naughty tales that would eventually creep onto her pages. Once she was bitten by the Internet bug, she found that others wanted to read what she’d written, so, she worked to improve a skill she’d always loved, but had never tried to polish.

You have subscribed to alerts for Jude Mason.

You have been added to Jude Mason's favorite list.

You can also sign-up to receive email notifications whenever Jude Mason releases a new book.