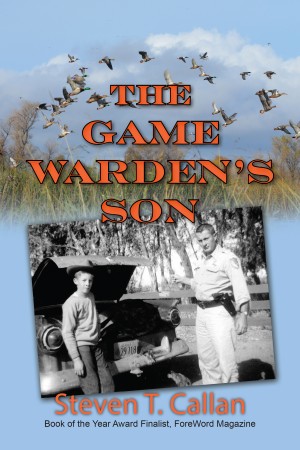 Steven T. Callan was born in San Diego, California. With an insatiable interest in wildlife, particularly waterfowl, he never missed an opportunity to ride along on patrol with his father, a California Fish and Game warden. Steve graduated from California State University, Chico, in 1970 and continued with graduate work at California State University, Sacramento. Hired by the California Department of Fish and Game in 1974, he spent thirty years as a warden/patrol lieutenant, starting his career near the Colorado River, moving on to Riverside/San Bernardino, and finally ending up in Shasta County (Redding). Steve and his wife, Kathleen, support many environmental causes. Badges, Bears, and Eagles is a finalist for the 2013 ForeWord Book of the Year Awards not only in the Nature category but overall. Steven was also honored in 2014 by the Outdoor Writers Association of California for Best Outdoor Magazine Column. You can find Steven online at Callan.coffeetownpress.com.

Reviews of The Game Warden's Son by Steven T. Callan

You have subscribed to alerts for Steven T. Callan.

You have been added to Steven T. Callan's favorite list.

You can also sign-up to receive email notifications whenever Steven T. Callan releases a new book.