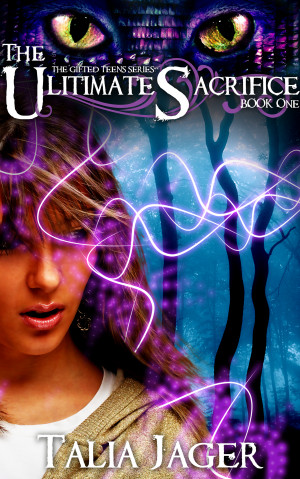 By Talia Jager
Rated 4.25/5 based on 4 reviews
Within our world exists a much darker world only known to a select few. Some are identified as “gifted” and brought to an institute where they develop their unique talent.
It is here Kassia finds out her talent is both dangerous and difficult to control. Her growing power alerts demons of her existence, putting those around her in danger. She sets out on a journey that will change her forever. More
Kassia is a 16-year-old girl just trying to have a normal life. This is somewhat difficult because she has the ability to inflict pain on others with her mind, which is why she was sent to a special institute for kids with various gifts. It is here Kassia met her best friend Mira.

Their lives will change forever after Mira is attacked and Kassia finds out her talent is much more powerful when she saves her. Little did she know that this act would attract the attention of demons.

Suddenly she is on the run from them with her boyfriend, Mira, and a few of their close friends. Realizing she can’t outrun the demons, she seeks the guidance of a shaman. The shaman tells her the heart breaking news that the only way to protect her friends and the institute is through her own death.

Also in Series: The Gifted Teens

Reviews of The Ultimate Sacrifice by Talia Jager

This is one of my favorites series, I’ve read this book three or four times already. The synopses really did me in too, but I came to the conclusion that this synopses tells way too much about the book. I expected the things that have been written to happen in the first chapters, but in fact some things happen in about half way in the book. So If you don’t want to know what exactly happens in the book, you should skip it. So my synopses is:
Kassia is a normal girl, if having a extremely dangerous gift could be considered normal, she has her group of friends and study in a school for other gifted teens. Some circumstances make her use this gift for a bad thing and that makes her a target for the demons, and now she and her close friends have to find a way to escape those that want her power for evil things.
This is the most I can tell without giving more info about the book. If you want to read the official synopses scroll down a little bit. ^-^

I love the concept of gifted people going to some special school in order to learn their history and how to control their own gift. And this is one of those books where the main character has some very rare and very powerful gift that should be wisely used, the problem is: Kassia is a very hot-headed person, and she can’t control her gift when people anger her so she is constantly observed by the teachers and even her close friends and need to be controlled when she loses grasp in her own gift. What Kassia doesn’t know is that there’s some prophecy about her and her gift and a lot of people wants her dead or fighting for the good side. She has to flee her school with her friends and boyfriend and find a way to fight the demons. I love books where we see a lot of characters and that each one is important in their own way, you end up liking all of them, and I also like the romantic relationships. Kassia is a interesting character, her gifted together with her short temper make her seem like a tickling bomb, and only her best friend and boyfriend can actually make her cool down. The other students often show signs of being scared of Kassia, mostly out of fear in angering her and being a target for her gift. She often express her like or dislike of people right away.
Mira is Kassia’s best friend and roommate, she is the only person that seems to stand Kassia’s gift without any problem so she got the “function” of being Kassia’s guardian in order to control any bad situation where Kassia could use her gift. Mira’s gift is very convenient in this case, since she can compel people to do her bidding.
Noe and Auralee are also Kassia’s friends and they live in the some floor in the dorm. Noe is more of a quiet person and she can see the future with her gift, but her visions come and go of their own will. Auralee is a very cheerful girl and she always have some t-shirt with funny sentences, some of them being about what she is feeling like. Her gift is mind reading.
Zane is a very shy and very smart guy that is obviously interested in Mira, but she doesn’t really respond to it. He is scared of Kassia and is embarrassed about his gift which is talking with animals.
Daxton is a new transfer student and Kassia gets his attention right away, and Kassia also gets interested in him, they start to date and soon we discover that Daxton dream landscapes can help Kassia in not using her powers when she is mad.
This book is written in first pov and switch between Kassia and Mira around the second half of the story, and is very easy to follow through and is done in a great way.The book has a main story to follow in the first book, but leaving enough things to make up for the next book in the series.

I really enjoyed reading The Ultimate Sacrifice. Some of my favorite books has a school/campus setting. So yes this is now on my favorites list. This is about friendship and just what you will sacrifice for those you care about.

Kassia lives at the Glendale Institute, a school for the gifted. All the students here have some kind of special gift or power. There are mind readers, dreamers, compellers and ones who can see the future. Then there is Kassia, a mind blower, someone who can cause pain and kill with just her mind. She hates her gift because most of the students are afraid of her and she doesn't want to hurt her anyone if she gets angry. Kern, a head demon is determined to kidnap Kassia and turn her against the world. Kassia and her friends set out find a way to keep her safe. Will Kassia make the ultimate sacrifice to save her friends?

This for me was an interesting read, I loved how the author brings so many different elements into the story. Friendship, romance, action and of course all the cool gifts. It was also an emotional story, I laughed and was sad right along with the characters at times. I'm looking forward to reading the sequel.

This e-book was given to me by the author for review. This did not affect my review in any way.

I loved how this book starts off in dialogue, it really lets you just dive right in to their personalities. I love how this book is a first person perspective, I connected to the characters right away which is one of the many things I loved about this book.

I loved how the author switched points of view during the book. By switching POV throughout the book, you can really get to know the characters better, and they opinions about things.

I think having Kassia's or Daxton's power would be really interesting. I say that because if i had the power to do either of things and people knew about it I would be treated differently.

(reviewed 2 days after purchase)
vanessa eric reviewed on May 27, 2011

The book was surprisingly a one light and easy read, far from what I expected when I first read the summary. Nonetheless, I’m giving the author some kudos because after a few chapters, I was fixed to the book even when my eyes were strained and fluttering in drowsiness, in the dead silence of the night. Yes, I found myself saying ‘Okay, another 30 minutes then I’ll go to sleep’.

The plot was truly simple and easy to digest, there’s absolutely nothing complicated about it. It chronicles a story about 16-year-old Kassia, who is a mind-blower with deadly stare, battling demons who threaten to make her as one of them. Still, at the same time, I was longing for more details and challenges because it was such a good story with added twists. I wanted to read more of it, but before I knew it, it’s over. The story took off a bit slow, revolving around school and romance, but as it progressed, everything started to go wild and quite thrilling. On top of that, the first person perspective worked well in bringing both Kassia and Mira to life. The voice was very teenage-like, matches their characters and their emotions were portrayed in convincing manners. All in all, the language used was simple yet flawless.

Somehow, I couldn’t really connect to the characters although in my honest opinion, they were developed well and quite distinctive. Maybe it’s me, I’m a 25 year old reading a story about some 16 year olds. Even so, the author did manage to spark my interest with Daxton. Oh, how I’m dying to have a boyfriend who is capable of taking me anywhere just by dreaming! I bet every girl out there wants a Daxton too!

On the unimpressive side, switching from one POV to another made me to question whether the use of first person perspective was wise. As a reader, I want to read something that is consistent throughout, where I don’t have to 'switch' myself and become another person. Perhaps, the author should have used third person perspective instead to better deliver the story. At least, I could be the bystander, witnessing everything as it unravels. Maybe the author had intended it that way too, to make readers to feel for themselves the emotions both Mira and Kassia felt for each other since they’re best-friends. It might have not worked for me, but it might work for other readers.

Even though the story was a bit teeny for me, my final verdict is this is a fairly good book. Teenagers out there would find this story both engaging and heart-warming, with endearing romance and stirring suspense. I definitely recommend the book, especially to teenage readers as the characters are teens themselves. Judging from the ending, I could tell that this book isn’t the end of the story.