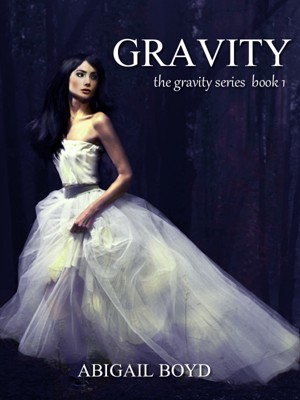 Abigail Boyd began writing stories as a kid on dark and stormy nights. She was born and still lives in Michigan with her husband and the haunting cries of three rambunctious children. Her influences include Stephen King, Veronica Mars, and lots of processed sugar. She wishes that time had a pause button.

Gravity is the first book in the four part Gravity Series. The second book, Uncertainty, is out now, and the last two books will be released on November 24th, 2012. For more information, feel free to contact me or visit me online. 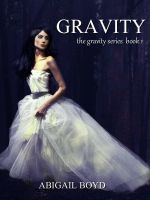 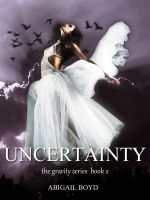 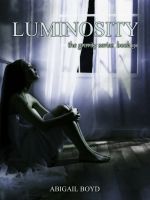 Reviews of Gravity by Abigail Boyd

The story line is truly amazing! (There were some minor grammatical errors) The suspense though!

I am tortoise-slow reviewing books sometimes, so my apologies to Abigail Boyd. Gravity is one of the better written YA paranormal books I bought for my Kindle years ago. I liked the characters and story, though I'm not a fan of high school drama. But the main characters are teens, so I bore through it and found it not as unpleasant as I anticipated. And though I have never read the series, I intend to do so soon.

Delighted and warmly recommends
The story of Gravity develops as an arch-classical young adult and teen book. A large portion of the story is staged in high school with the annoying rich popular brat and her satellite of other populars, the school bully, the boring teachers, the patronizing principal, with the overprotective parents impatiently waiting at home, with, of course, the shallow mother, the playful, tolerant and still somewhat endurable dad.
And the unpopular misfit girl as main protagonist. Of course, genre requires, the new guy in school is uncommonly handsome and, against all odds, is somewhat attracted to the plain girl which is the hero of the book. Add a little paranormal power she suddenly discovers and voila!
How cliché can a young adult book be?
Except! There are few things that are actually cliché with this story.
The protagonist is not exactly 'weird'; she is just normal and denying this normality as we all did in high school, focusing more on what we did not have, we were not and what others had instead of realizing that being different was as normal as it could get. The bully ends up somewhat philosophical, the haunted house does not have the texture of a Poe's 'House of Usher', the handsome boy is never presented as a soul mate that belongs by some metaphysically doubtful concept to the hero, and her powers have nothing powerful.
The story presents the 'normal' life of Ariel Donovan a few weeks after her best friend who had been drifting apart has just disappeared and was assumed runaway. This disappearance lays the foundation of the not so normal life of Ariel as she discovers the uncanny ability to dream and see ghosts, including her lost friend. Ariel builds herself a new life, including new networks of relations, a new friend, some flirting with her math tutor, the new handsome guy, some Halloween hanging out even with the improbable and very confusing school clown Alex.
Not convinced till now. Well the book has two other main qualities worthy of mention. The characters are normal teenagers (leaving aside the little paranormal that is definitely non-intrusive). They like, struggle normally, talk normally, get bored normally, or envious normally. They look at television, they indulge into their normal play of friendship, or acquaintance, and they get criticized normally by their over-protective yet loving parents. The characters are in each and every way 'probable'. Most could be real or at least give out an air of plausibility. Secondly, the form of the text is happily surprising. Mrs. Boyd succeeds in giving to the text a delightful quality. The vocabulary is impressively varied and the structure of sentences is simple yet elegant.
I would warmly recommend reading this book to any young adult from 12 to 99 years old.

If there’s something that frightens me in a paranormal story, that would be ghosts - the whole flickering lights, knocking on the walls, and cold, evil presences - Gravity has it all and more! Ariel Donovan, the main character, is literally haunted in her dreams by her friend, Jenna, who disappeared mysteriously. When these visions start happening when Ariel is dizzy or unconscious and she starts catching glimpses of more recently disappeared people, Ariel knows that something ominous – even evil, is going on and that she has to do something about it. The ability to see ghosts that Ariel might have inherited from her grandmother is, however, not as glamorous and exciting as people may think.

Although action, spine-chilling incidents and moments of true suspense are liberally spread throughout the story, the true magic of Gravity for me lay in the absolutely scary, spooky descriptions of hauntings and the things Ariel sees and experiences. The author's highly realistic descriptions managed to create a sinister atmosphere that had me closing the book well before dark.

Even though the characters are well crafted and believable, the male protagonist, Henry Rodes, irritated me a bit with his rapid and frequent attitude changes. Ariel however, disagrees with me and finds him the personification of all her romantic fantasies; to the point that it got on my nerves. Apart from this mild annoyance the author kept her characters within their age group and allowed them to still be kids. This story focuses on the problems that teenagers have with popularity, pressure from parents, favoritism from teachers and financial and social standing within the community. I found some of this truly heart breaking and especially so for the under dogs. Although the story has an underlying tone of sadness and loss to it, there fortunately are times that you will laugh out loud.

Gravity is one of those books that keeps you guessing right up to the end and would be a suitable read for young adults as well as adults who love a good, suspenseful ghost story. (Ellen Fritz)

This is a fantastic book with believable characters, good writing, mystery, suspense, and awesomely creepy supernatural elements. I've only just realized that I posted a review here for Book 2, but never for Book 1, so I'm correcting that mistake on my part.

Looking forward to the rest in the series.

I'll admit it was a little tough to get into at first, slow moving but once the author hits a crisis the story proceeded much quicker and more interesting. I did enjoy the tale and although a bit of editing is needed (minor things like grammar and wrong words) it's one I would recommend to anyone looking for a tingle up the spine. Its classic creepy and a twisted climax make a good read. Only, I was disappointed at the ending and how unfinished it felt. However, since this is to be a series it's fitting that the unknown was left incomplete. I wouldn't mind taking a crack at the next one!

15 year old Ariel is having a tough sophomore year. Her best friend went missing over the summer and everyone wants to know if Ariel knows anything about it, not to mention she is being harrassed by the school elite. In comes Henry, the new guy, and when he befriends Ariel she starts to feel like a normal teen. That is until she starts to see the ghost of her missing friend. Good story telling and hard to put down. Can not wait for the next book and it was a great way to spend an afternoon in the sun.

(reviewed 8 months after purchase)
Elizabeth Miller reviewed on Jan. 30, 2012
(no rating)
15 year old Ariel is having a tough sophomore year. Her best friend went missing over the summer and evreyone wants to know if Aiel knows anything about it, not to mention she is being harrassed by the school elite. In comes Henry, the new guy, and when he befriends Ariel she starts to feel like a normal teen. That is until she starts to see the ghost of her missing friend. Good story telling and hard to put down. Can not wait for the next book and it was a great way to spend an afternoon in the sun.

Ariel is having a difficult time. Her best friend left her home one evening and hasn't returned. She has withdrawn from everyone and is beginning her Sophomore year alone. The town that she lives in is named "Hell". I think it pretty much sums up what she is going through.

To make matters worse, she starts hearing strange thumping sounds and she is having vivid dreams of Jenna. A new boy moves into the area and he is way out of her league, but he is still interesting and cute. Her new next door neighbor begins to spy on her. To top it off, she starts to see ghosts.

This is the set up for the novel. There is a mystery involved that has a surprise ending. I am definitely looking forward to the second book.

Jenny goes missing and Ariel must seek the truth.

***
Teenage girls in Hell, Michigan go missing in Abigail Boyd’s twisted paranormal description of teenage high school popularity, puppy love, and murder. Being fifteen is hard enough in a small town, but when Ariel’s best friend goes missing, she start seeing things. New best friend Theo and her wishful thinking sweetheart Henry stir up her already mucked up emotions and complicate her relationships. There is no happy ending for this teenage angst. The action quickly rises towards a climax but peters out without quite making it.

You have subscribed to alerts for Abigail Boyd.

You have been added to Abigail Boyd's favorite list.

You can also sign-up to receive email notifications whenever Abigail Boyd releases a new book.