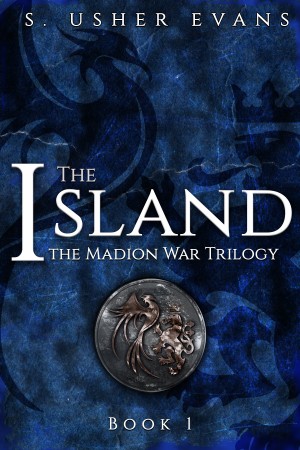 Rated 5.00/5 based on 1 review
He's a prince, she's a pilot, their countries are at war. Marooned on an island, they must put aside their differences if they want to survive. More
Prince Galian is third in line to the throne, but prefers his place as a resident at the Royal Kylaen Hospital. When his father urges him to join the military to help reclaim their colony, Galian is forced to put aside his oath to Do No Harm and fight a war he does not believe in.

Across the great Madion Sea, Captain Theo Kallistrate dreams of a day when she is no longer bound by conscription to fight for her country's independence. But when the Kylaens threaten, honor and duty call her to the front lines to fight off the oppressors.

When an air skirmish goes wrong, both Theo and Galian crash on a remote island hundreds of miles from either nation. Grievously injured, Theo must rely on Galian's medical expertise, and Galian must rely on Theo's survival skills, to live another day in a harsh and unforgiving terrain.

Can they put aside their differences long enough to survive? Or will the war that brought them to the island tear them apart?

S. Usher Evans is an author, blogger, and witty banter aficionado. Born in Pensacola, Florida, she left the sleepy town behind for the fast-paced world of Washington, D.C.. There, she somehow landed jobs with BBC, Discovery Channel, and National Geographic Television before finally settling into a “real job” as an IT consultant. After a quarter life crisis at age 27, she decided consulting was for the birds and rekindled a childhood passion for writing novels. She sold everything she owned and moved back to Pensacola, where she currently resides with her two dogs, Zoe and Mr. Biscuit.

Evans is the author of the Razia series and Empath, both published by Sun’s Golden Ray Publishing.

About the Series: Madion War Trilogy

He's a prince, she's a pilot, their countries have been at war for 50 years. But when they're marooned on an island, they must put aside their differences if they want to survive.

Reviews of The Island by S. Usher Evans

Review
Ajay Kumar reviewed on Nov. 19, 2018
(no rating)
Very good story of the book and good character.I loved it really much .

This review was originally published on https://serobertsblog.wordpress.com/ and contains SPOILERS.

In short, it was a beautifully crafted, sweeping fantasy full of struggle and overcoming obstacles. I thoroughly enjoyed the well-crafted characters and finely executed themes. 5/5 Stars! ❤

If there are two kinds of heroes that make me want to stay up deep into the middle of the night with blood-shot eyes, holding onto my nook like it’s a life-preserver, it’s tortured souls. That’s not an official type of character, but that what I call Theo. Tortured souls are like anti-heroes and reluctant heroes, but Theo is neither of those. She’s willing to do what needs to be done to survive; she hides her pain deep down and tries not to get close to anyone else.
“And to save my own heart, I’d stopped learning their stories, stopped learning their names-…It didn’t matter though; the pain was the same.”
She was placed in the military at twelve years old, an orphan, who knows how to butcher a fluffy, cute rabbit. She doesn’t want to fight. She wants freedom, she wants to love. But, she’ll fight because she knows what pain is and it’s necessity to freedom of her people. Her soul is tortured -> Tortured soul. She’s a perfect leading role.

In the beginning, there is symbolism of a phoenix rising from the ashes. By the time we finish the book, we realize that the Raven government is just as deluded and corrupt as the Kylaen king. So, I suspect that this is a reference to Galian rising from under the thumb of his father’s rule at the end of the book. His defiance is Katniss-Everdeen-style:
“Boy, when the king of Kylae addresses you, you answer yes, sire,”…
[Conversation about King Grieg’s expectations of Galian, and Galian calling him out on leaving Galian on the island and pushing him back into the military.]
“Did you help that woman escape?”
“Yes, sire,” I said with a flourished bow before storming out of the family room…
What a sassy princeling.

Theo’s flaw. The crisis in a story usually happens when the protagonist’s flaw is challenged directly, and that flaw is something that the character must overcome at the climax. Theo’s flaw shows a vulnerability that we can’t see in the first act. In fact, I couldn’t find it at all until we were well into the second act. She’s such a thick-skinned person that getting to the heart of her vulnerability is hard to find, even among the inner monologue we get from her. Simply put, she is over-confident and believes she can handle everything herself. For example:
The princeling had gained some distance while I was losing his contingent of bodyguards, and I put on a burst of speed to follow him.
“Stand down. This one’s mine.”
When she winds up in the death camp at the end of the book, she realizes she can’t escape without help, and has to rely on Galian and Kader. So, she overcomes that over-confident, work-alone ideology.

Galian’s own flaw is a lot easier to find: he’s a pampered prince and has a naivety thinly veiled as “infectious optimism.” He overcomes that at the end when he faces his father about his father’s sins against him and the Raven. Not an optimistic word to be found there, and all confident truth.

There are a lot of themes and parallels so expertly woven together throughout the whole book. Survival, love, war, loss, pain – all of these are major themes. But, we also find rebirth, mistakes, and kindness as lesser themes. My favorite parallel of recurring themes is a combination of two instances as follows:
“And I suppose you’ve never made a mistake in your entire life?” He asked me.
“Not one that made the papers.”
[160 pages later]
“Today, I’m here in the hospital room of one of the many brave pilots in our Raven fleet, Captain Theo Kallistrate.” He paused to gesture to me in the bed, and I wondered if I should wave or something…
[She’s being pushed in front of the cameras to push an agenda, and she doesn’t like it.]


What did I not love so much?"

You know that “I’ll leave you here for 30 minutes while I go eat and clean up because we’ve been stuck on a deserted island for two months,” trope? Yeah, me either. But, I hate it. I hate it so much, it hurts my soul.

You have subscribed to alerts for S. Usher Evans.

You have been added to S. Usher Evans's favorite list.

You can also sign-up to receive email notifications whenever S. Usher Evans releases a new book.