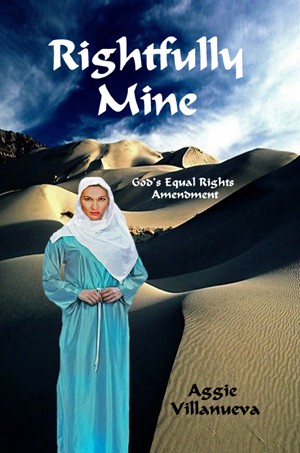 By Aggie Villanueva
“Why should the name of my father be wiped from Israel like footprints in a sandstorm because he bore only daughters?” The promised land—God’s precious gift to the Israelites. Precious indeed, but for Rizpah and her sisters the promise seemed empty. Only a male could claim a family’s inheritance of land, and since Rizpah and her sisters had no brothers or husband...

Published at Thomas Nelson before age 30, award-winning author Aggie Villanueva is now a self-published fiction & nonfiction author at Amazon/Kindle with The Rewritten Word (won the 2011 Global eBooks award in Writing/Publishing), Rightfully Mine and Amazon Categories Create Best Sellers, all of which reached bestseller in multiple categories shortly after release, and also ranking in multiple categories of Amazon’s Top Rated, Hot New Releases and Tag Communities lists.

Rightfully Mine: God's Equal Rights Amendment
What an unexpected blow to realize the Promised Land was being divided only between men. Rizpah stands against an entire nation to earn for her and her sisters what is rightfully theirs. & into this is seamlessly woven a love triangle of Rhett-Scarlett-Ashley proportions. A women’s equal rights amendment straight out of history, handed down straight from the throne of God. How much more do we need to understand the great worth of women, our worth to God throughout history, today and evermore.

You have subscribed to alerts for Aggie Villanueva.

You have been added to Aggie Villanueva's favorite list.

You can also sign-up to receive email notifications whenever Aggie Villanueva releases a new book.