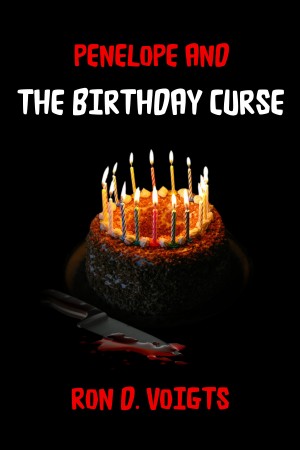 Penelope and The Birthday Curse

By Ron D. Voigts
Rated 4.67/5 based on 3 reviews
In a time before cell phones, MP3 players, and the Internet, a girl could roll up her sleeves and solve a murder, especially before she becomes the next victim. PENELOPE AMOUR is thirteen and rebellious. Her controlling mother and eccentric father dominate her life. And she lives isolated in the Manor where such a murder has occurred. More
LOOK OUT, HERE COMES PENELOPE!

An isolated mansion in the country…stranded in a snowstorm…someone is murdered on Penelope’s birthday.

But who did it? Her gangster uncle on the run from the law. Or the Broadway actress who’s her own biggest fan. Maybe the jealous husband. Don’t forget about the mob hit man hiding in the woods behind the mansion.

A young fortune teller weaves a tale of a gypsy curse where three people will die. And it happens on Penelope’s 13th birthday. The adults bumble along, trying to discover the killer, while Penelope sleuths with the help of her friends to find the culprit. It’s a race against time before Penelope becomes the third victim.

This book for ages 9-12 weaves a mystery with madcap characters, who done it clues and non-stop action that’s a fun read for the whole family. The story is full of humor, suspense and mystery that will keep the reader guessing until the very end.

What others are saying about PENELOPE AND THE BIRTHDAY CURSE:

“I found myself laughing out loud in parts and sighing in sympathy in others.” M.W

“…there is plenty of mystery and merriment to keep all ages laughing and scratching their heads, trying to figure out, ‘Who did it?’” C.B.

“All in all, a very good read, especially late at night, during a storm.” T.P.

Originally from the Midwest, Ron D. Voigts now calls North Carolina home where he and his wife have a home off the Neuse River. Ideas for his stories comes from the rural areas where he has lived, places he has visited, his love of the paranormal, and an overactive imagination. Ron considers his writing to be a literary fusion of mystery, thriller, paranormal, and any genre that suits the moment. When not plunking out a novel at the keyboard, he spends his time sharpening his culinary skills, watching gritty movies, and eating cookies with chocolate chips.

Also in Series: A Penelope Mystery

Reviews of Penelope and The Birthday Curse by Ron D. Voigts

Cute young adult mystery story. Penelope is having a party but she doesn't really know the guest but her mother makes her attend anyway. Once the first body is found it seems that Penelope and her new friends try to figure out what's going on before someone else gets killed. Not a bad way to spend an afternoon in the sun.

This was a fun read. Penelope is a strong character with a fun personality and at times reminded me of Louise Fitzhugh's Harriet stories. Lots of funny moments and enough chills to keep the reader hooked. I'm looking forward to reading the rest of the series.

Agatha Christie perfected the locked-room murder. Nancy Drew stumbled into murders that mystified adults. However, PENELOPE AMOUR must solve a murder that confounds the adults in her world before she becomes the next victim. In Ron Voigts’ debut novel, we laugh and scratch our heads at the antics of the invitees to Penelope's 13th birthday party in an isolated mansion ruled by her strong-willed mother and eccentric father. Then, Ron takes us to the darker side. After the first murder, a gypsy foretells of two more. We shudder as the killer stalks Penelope, and the action gets too close to our heroine. Sometimes a young girl has to become a strong, levelheaded woman to prevent the murderer from killing her so she can get to the birthday presents she deserves. Though it is a Young Adult novel at heart, there is plenty of mystery and merriment to keep all ages laughing and scratching their heads, trying to figure out, "Who did it?” Five starts out of the gate.

You have subscribed to alerts for Ron D. Voigts.

You have been added to Ron D. Voigts's favorite list.

You can also sign-up to receive email notifications whenever Ron D. Voigts releases a new book.