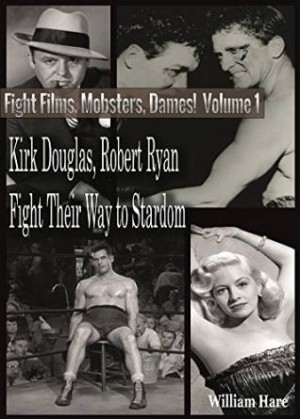 By William Hare
This work explores the success of great films of the early post World War Two era by exploring the links and dimensions of young men impoverished by the Great Depression seeking fame and fortune as professional boxers. Their efforts are examined alongside the control of professional boxing by major mob elements More
Chapter One: A Dark Tunnel

The term tunnel vision denotes negativism. It refers to someone of severely limited

vision. It is used as a pejorative, a negative term, an assessment that an individual cannot see beyond his or her nose.
Stanley Kramer would have the last laugh in the case of anyone exclaiming that tunnel vision is necessarily a bad thing. In the case of Kramer his tunnel vision precipitated the breakthrough hit of the young producer´s career at a critical time.
After growing up in a tough section of New York City during the Great Depression Kramer had the good fortune to attend New York University. He studiously dedicated himself toward the cinema, where he hoped to make his living. Kramer´s first effort, however, was a bomb. He faced the tension of someone whose abilities were being questioned. The nagging question was Does this young man belongs in the business or should he choose another profession?
Kramer launched his career in the big time as a full-fledged producer after beginning as an associate producer on the 1942 adaptation of a Somerset Maugham novel, The Moon and Sixpence. He followed a traditional rule laid down long ago of writing about what you know best. In this case the rule applied to producing, but the reasoning was valid in any instance where the story process was involved. As someone growing up during a trying economic period in America´s largest city Kramer to survive became mature beyond his years.

When Kramer joined the ranks of producers his launching pad was an option deal involving two stories by a New York legend who knew the city intimately from the perspective of a renowned journalist and freelance author. Ring Lardner was the author and Kramer set sail for the big time in cinema by filming the first of the two stories in the city where he had grown up. Its title was fittingly So This Is New York. It was a comedy starring Henry Morgan, Rudy Vallee and Bill Goodwin.
After a setback in his first effort Kramer turned his attention to the second of the two Lardner stories he had optioned. In Lardner´s New York newspaper days he was at one point one of the city´s most prominent sportswriters. One intriguing beat that many sportswriters have found fascinating, particularly among those who later find work as freelancers, such as Lardner, Paul Gallico and Budd Schulberg, was covering the boxing scene. There was no better place to cover boxing than in New York City, the world’s fistic capital. The dream of young fighters was to headline in fabled Madison Square Garden.
During the early days of television three of the most popular weekend staples in addition to Saturday night´s Your Hit Parade and Sunday´s hit variety program The Ed Sullivan Show featuring as host yet another prominent Gotham columnists who was once a sportswriter, was the leadoff Friday night Gillette Cavalcade of Sports. The manufacturer of the world famous blue blades sponsored the main event of boxing cards featuring the finest in fistic talent. They generally originated and were televised live from The Garden and on some occasions St. Nicholas Arena with action commencing at 10 p.m. Eastern Time.
The Roaring Twenties followed by the Great Depression emerged as the foremost competitive period in the history of boxing. The two heavyweight title fights between Jack Dempsey and Gene Tunney set both attendance and box office records.

Author of Struggle for the Holy Land and four film books. I am an author of varied and highly eclectic interests. William Hare was born in Los Angeles and launched his writing career in high school, rising to the positions of Editor and Executive Editor at the Scholastic Sports Association, the prep sports department of the Los Angeles Examiner. While at the Examiner he became the youngest writer ever to cover a World Series game for a major metropolitan newspaper. After graduating with a degree in political science with minors in history and English he then became the youngest sports editor at a Los Angeles area daily at the Inglewood Daily News chain. In addition to covering the busy Los Angeles sports scene he began contributing movie features,visiting the local studio scene with interviews of Kim Novak and Ernest Borgnine and reporting on films in the making starring Fred Astaire, Rock Hudson and Elvis Presley. Hare ultimately became a freelance author of eclectic tastes. His first major work was in the narrative historical realm, ¨Struggle for the Holy Land¨, which encompassed 3,500 years of history in the region where civilization began. It showcased larger than life figures such as Muhammad, David Ben-Gurion, T.E. Lawrence, Chaim Weizmann, Franklin Delano Roosevelt and Winston Churchill. Hare's next work invoked cinema history, ¨Early Film Noir¨. This work concentrated on the roots of the popular genre with special emphasis on ¨The Maltese Falcon¨ and how the film's immense success catapulted its leading man Humphrey Bogart and director John Huston to Hollywood's top ranks. Hare next wrote ¨L.A. Noir¨ , which focused on how the City of Angels afforded the perfect backdrop for some of the genre's finest films. His work ¨Hitchcock and the Methods of Suspense¨ closely analyzed the creative methodology of the great London director by focusing on such major works as ¨Vertigo¨ , ¨Shadow of a Doubt¨ and ¨Strangers on a Train¨ . ¨Pulp Fiction to Film Noir¨ examined the effect of Great Depression pulp magazine fiction and how the genre's two leading authors, Raymond Chandler and Dashiell Hammett, converted their popularity into bestselling novels that were then adapted to the screen and became film noir classic dramas.

You have subscribed to alerts for William Hare.

You have been added to William Hare's favorite list.

You can also sign-up to receive email notifications whenever William Hare releases a new book.