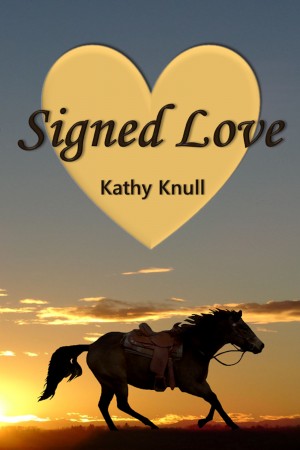 By Kathy Knull
Sunset, saddles and secrets. Armani suits are replaced with denim when Colt returns to the family ranch. His arrival is met with a wide variety of reactions, but it's Kallie's silent panic that rattles him most. Persistence sparks passion but danger changes lives. More
A handwritten note has Colt Waycroft replacing Armani suits with denim for a return to the ranch where he grew-up. Powerful family bonds survived his fifteen year absence, but foul reactions from a certain ranch-hand are unexplainable. A tomboy from his past, now a green-eyed temptress, becomes a complicated distraction though. Her continuous attempts at avoiding him is mystifying, and the silent panic in her eyes rattles his judgement.

Years ago, Kallie Forrester thought Colt had taken her schoolgirl fantasies with him when he left for college. One look at him now and her knees weaken with an aged case of swooning teen syndrome. Past friends or not, she can't face him. Not now. Not after what had happened.

A woman stands before a window, staring outside. The rusty glow of a spectacular sunset adds highlights to her greying hair and accentuates laugh lines at the corners of her eye’s. Her thoughts are of how family, years of marriage, motherhood, and life’s circumstances have made her heart both soar with joy and ache with grief.

Kathy’s destiny began when her sister’s boyfriend introduced horses into her life. Her oldest brother further contributed to making her who she is by giving Kathy a pony for her seventh birthday. These two important factors alone may conjure an inaccurate picture of her childhood though.

Several years separate, the youngest of five, from her other siblings. The family lived in an older home in Alberta, Canada’s capital city, which meant stabling the pony. At times, coming up with extra cash strained her hardworking parents budget. Yet, rather than discourage their little girl’s dream of becoming a horsewoman, they always found a way to pay the monthly boarding cost.

By age 10, Kathy competed at her first horse show and was hooked.

With gained knowledge and experience the range and caliber of competitions this self-taught rider entered expanded.

In her early teens, Kathy took an evening janitorial job to help fund her passion. When not in school or working, training and showing a new young Quarter Horse became her life.

In 1978, she met a man who grew up on a farm and shared her love for horses. They married and started a family.
Between them, they had three show horses boarded at a stable. Once, they could afford to they bought and made the practical move to the country where they raised their daughter, son, stepdaughter and an ever changing number of equines.

Along with a home based business, showing and training horses and giving riding lessons became a way for Kathy to earn money while she stayed at home with the children.

In 2009, her husband retired from his job in the city. With their 5th wheel RV, the two set off, east, across Canada, and returned via the historic Route 66 through the U.S.

Back home in Alberta, the couple moved to their lake cottage. The laid-back lifestyle took adjusting to, but they learned to relax and enjoy days together.

The move brought another significant change for Kathy, horses no longer were a day-to-day pleasure. A short drive to the daughters in the country is all it takes to get a renewed fix though.

Kathy’s interests include visiting with family or friends, a wide range of crafts, woodworking, rowing or paddling in search of driftwood, boating, quilting, playing cards, traveling, and of course reading and writing.

When the lake water freezes and snow covers the ground, she uses the increased downtime for a rekindled passion. One she developed long ago, with their young children in bed and her husband often traveling with his job. A time when she spent many star filled nights long-handing pages of fiction.

Since living at the lake, she has fine-tuned her writing skills, revised old manuscripts, and created new ones. With a Contemporary Western Romance, titled, “Signed Love,” published so far.

A love of family, life and experiencing both country and lake living inspires Kathy Knull’s fiction and her “Saddles to Shorelines, and Life as it Comes” blog which is on her website.

You have subscribed to alerts for Kathy Knull.

You have been added to Kathy Knull's favorite list.

You can also sign-up to receive email notifications whenever Kathy Knull releases a new book.