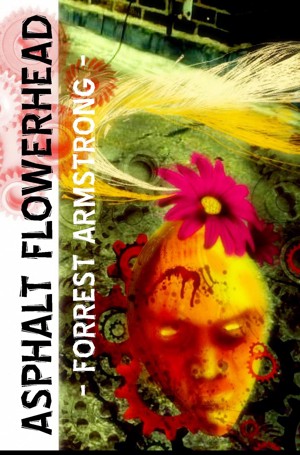 By Forrest Armstrong
Rated 4.00/5 based on 1 review
A picaresque movement in a nameless city. An America engaged in a propaganda-war, determined to clog drug-flow from the Netherlands, and the rubble of a broken city on the opposite shore of the Atlantic. The youth who dream in the face of nightmares, who explore themselves with chemicals with sad paint with jail cells with institutions with a belief in something bigger than the flesh...
Available ebook formats: epub mobi pdf lrf pdb html
First 33% Sample: epub mobi (Kindle) lrf more Online Reader
pdb
Price: $3.99 USD
Buy Add to Library Give as a Gift
How gifting works
Create Widget
Tags: weird metaphysics surreal experimental junky bizarro transgressive postmodern
About Forrest Armstrong

“I like to think I have reached a state where I can observe the world from a detached location,
somewhere near the clouds. I write surrealism because I think in the abstract we are closest to
truth. Everything divine is surreal. I make enough money to get to whatever comes next but no
more. I am writing to give you all I have felt, and nothing else - I am a vehicle and I am trying to
bring my visions to the world, however I can.”
~ Forrest Armstrong

The author writes fantastic imagery. While reading it, you can visualize what's happening through a kind of psychedelic haze. It's great for the atmosphere of the story being told. While not a junkie, you can definitely imagine it the way the characters would see things.

The writing is really good and the story flows well even though it switches to follow different characters throughout, which can be hard to do. There's a feeling of satire to the story in places, which I liked a lot because it's not heavy-handed and it's a little ridiculous and far out.

I didn't like that there was nothing to indicate the change between narration and when a character was thinking, like italics or something like that. It can sometimes be awkward. Some of the dialog is also a little stilted or over-dramatic, not like anything an actual person would really say in most cases. Not always, but it happens occasionally. It does fit with the atmosphere of the story though, so it's not jarring.

overall, it makes me think of Kurt Vonnegut and Philip K. Dick, which is great. Or like Philip K. Dick and William S. Burroughs had a brainchild together.

You have subscribed to alerts for Forrest Armstrong.

You have been added to Forrest Armstrong's favorite list.

You can also sign-up to receive email notifications whenever Forrest Armstrong releases a new book.