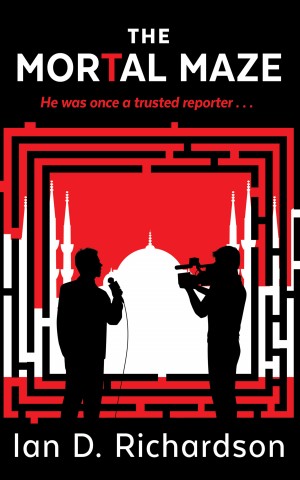 A spy thriller packed with moral challenges and spectacular events. Set in the Middle East where star television correspondent Jackson Dunbar encounters people from his past who exploit a weakness with disastrous and unpredicted consequences. More
A thriller about espionage, corruption, love and betrayal. When BBC television correspondent Jackson Dunbar gets a much-desired posting to the Arab world, his fame and status seem destined to grow. But he has a weakness that is exploited by Western intelligence and it threatens to wreck his career. Friends and former colleagues from his almost-forgotten past re-enter his life with unexpected and powerful moral challenges. Author Ian D. Richardson, a former radio and television news editor, uses his inside knowledge to take readers on a fast and furious adventure with some shocking and unforeseen twists and turns.

Ian D. Richardson has loved writing for as long as he can remember – perhaps even before that – and he wrote his first letters as soon as he learned to tap away at his father's typewriter when aged just six years old.

He was born to be curious. His mother recalled that on his first day at school he strolled into the headmaster's office to look around and to ask what the head did all day.

Ian grew up in a newspaper family at Charlton in rural Victoria, Australia. After the family business was sold, he switched to broadcast journalism -- first with Radio 3BO Bendigo and 3AW Melbourne, Australia, then in London with BBC radio and television. His senior BBC posts included head of World Service foreign correspondents, a founding editor of BBC World Television, and the founding managing-editor of BBC Arabic Television. These experiences left him ideally placed to write his authentic thriller, The Mortal Maze.

Ian and his wife, Rosemary, are keen genealogists and it was their enthusiasm for researching their family histories that led Ian to discover the compelling story of what happened to his missionary great aunt in his non-fiction book, God's Triangle.

You have subscribed to alerts for Ian D. Richardson.

You have been added to Ian D. Richardson's favorite list.

You can also sign-up to receive email notifications whenever Ian D. Richardson releases a new book.