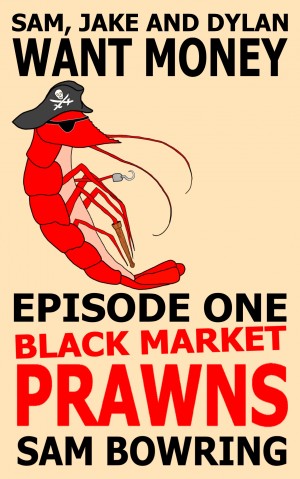 In Episode One - Black Market Prawns - Jake strikes a deal with a dodgy mariner to acquire one tonne of prawns illegally obtained from the horribly polluted harbour. Sounds like a good way to earn some coin, but during the height of Summer and without adequate refrigeration, the race is on to offload the goods before the funk really settles in.

Will Sam, Jake and Dylan convince the suspiciously smiling owner of the crappy restaurant downstairs to buy their ripening stock? Or perhaps their brand new recipe for Prawnshakes ('Prawns and milk, together at last') will prove a big hit with the unsuspecting public? Find out the answers to these, and other weird questions you never would have thought to ask, in the stupid tale that is Black Market Prawns.

Sam Bowring began writing at a young age, and had his first book published when he was nineteen. Since then he has written various other books and stage plays, as well as for various televisual broadcasts. His critically acclaimed fantasy series ‘The Broken Well Trilogy’, has reprinted four times and sold over ten thousand copies. It was called 'the stuff of fantasy writer’s fantasies’ (AurealisXpress). The first book of his 'Strange Threads' duology, 'The Legacy of Lord Regret' was selected as one of the 2012 '50 Books You Can't Put Down' list from 'Get Reading!'

Sam also works as a standup comedian, and has been nominated for several awards at important festivals. Fortunately he has never actually won anything, so this mild success never went to his head.

He is also the creator of a chaotic new card game, Bedlam Cards, which can be found at madhouseink.com.

About the Series: Sam, Jake and Dylan Want Money

These are the adventures of Sam, Jake and Dylan, three degenerate losers who live together on the 42nd floor of Hazy Towers, the worst apartment block in the known universe. At least their landlord, Mr Hayes, is such a spineless weasel of a man that they have never had to pay a single cent of rent. Still, government handouts only buy so much toast, and the boys are always on the lookout for a crazy way to make a buck.

Sam, Jake and Dylan Want Money is written by Australian comedian and fantasy author Sam Bowring, whose other books include the Broken Well trilogy ('the stuff of fantasy writer's fantasies' - AurealisXpress), and the Strange Threads duology ('utterly mesmerising - Courier Mail).

You have subscribed to alerts for Sam Bowring.

You have been added to Sam Bowring's favorite list.

You can also sign-up to receive email notifications whenever Sam Bowring releases a new book.