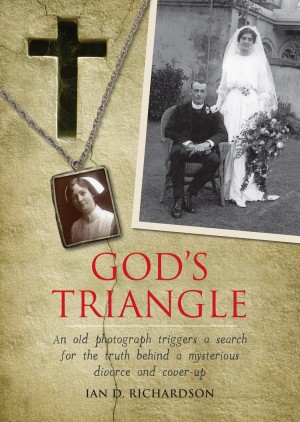 A true detective story by Australian-born journalist Ian D. Richardson recounting how he battled against a church, press and court cover-up of why his Baptist missionary great aunt's marriage to a fellow missionary in Bengal fell apart during the First World War. Richardson's discoveries says much about society’s often-twisted attitude to sex and other social issues in the early 1900s. More
God’s Triangle is a detective story – a true detective story. It began not as a book, but as a small addition to the author's family history file. The more journalist Ian D. Richardson learned about what happened to his missionary Great Aunt Florence “Florrie” Cox, the more determined he became to determine the truth. An official at the Australian film development agency, Film Victoria, became convinced that it would make an excellent film. But there were lots of gaps in the story. The film was put on hold for several years while Richardson battled to peel back the layers of cover-up by the Australian Baptist Church, the press and the Victorian Supreme Court. The story of Florrie Cox is compelling and revealing. It says much about society’s often-twisted attitude to sex and other social issues in the early 1900s. Learning what happened to Florrie Cox – and why – is a fascinating journey. A feature film based on the story of God's Triangle is in development in Australia.
Available ebook formats: epub
Price: $6.99 USD
Buy Add to Library Give as a Gift
How gifting works
Create Widget
Tags: scandal family history genealogy divorce adultery baptist church christians and divorce gender ambiguity coverup conspiracy missionaries in india supreme court rulings
About Ian D. Richardson

Ian D. Richardson has loved writing for as long as he can remember – perhaps even before that – and he wrote his first letters as soon as he learned to tap away at his father's typewriter when aged just six years old.

He was born to be curious. His mother recalled that on his first day at school he strolled into the headmaster's office to look around and to ask what the head did all day.

Ian grew up in a newspaper family at Charlton in rural Victoria, Australia. After the family business was sold, he switched to broadcast journalism -- first with Radio 3BO Bendigo and 3AW Melbourne, Australia, then in London with BBC radio and television. His senior BBC posts included head of World Service foreign correspondents, a founding editor of BBC World Television, and the founding managing-editor of BBC Arabic Television. These experiences left him ideally placed to write his authentic thriller, The Mortal Maze.

Ian and his wife, Rosemary, are keen genealogists and it was their enthusiasm for researching their family histories that led Ian to discover the compelling story of what happened to his missionary great aunt in his non-fiction book, God's Triangle.

You have subscribed to alerts for Ian D. Richardson.

You have been added to Ian D. Richardson's favorite list.

You can also sign-up to receive email notifications whenever Ian D. Richardson releases a new book.