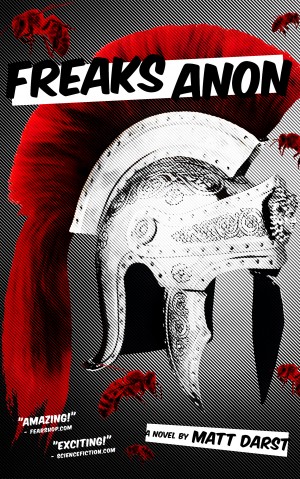 By Matt Darst
Freaks Anon is a paranormal superhero tale, a novel about myths, monsters, the men that both create and destroy them. It's a mash-up of comic book heroes and horror in the vein of Alan Moore. More
Collection notices. Disapproving looks. Sleeping in a van. Life’s hard for wannabe superhero. Things get harder still when Centurion’s sidekick, Henry, dies.

The police say Henry’s death was an accident. Centurion knows better. Henry’s death is part of a bigger pattern. Someone’s murdering children, kids with extraordinary psychic and physical abilities, across the South and Midwest.

He needs to find the killer fast. In Chicago, his prime suspect has already set her sights on friends Astrid and Kim. But these teens aren’t like anything he’s ever seen. They’re special. Like Henry.

Centurion will face spies, monsters, and the ultimate evil: the Chicago auto pound. If he doesn’t watch out, he might just find he’s the one in need of saving.

Freaks Anon is a paranormal superhero tale. Included with the novel is the dystopian short story Monument. All proceeds from the sale of Freaks Anon will be donated to Stand Up to Cancer.

"Darst works his magic in horror once again, this time expanding into the realm of superheroes in an exciting mash-up that fans of both comic books and the paranormal are sure to enjoy!"
- Stuart Conover, ScienceFiction.com

"I had so much fun reading Freaks Anon. Being a huge Alan Moore fan, I’m always hoping to read something intelligent when it comes to superheroes. I crave material like that…and with its great writing and believable characters, Freaks Anon nails it. It’s a fanboy’s dream. I once read that you should only keep the books you will read again, and I’ve tried to live by that. I will definitely keep this book."
- Frank Hrin, Fearshop.com Horror Podcast

"As with Dead Things, Matt Darst has created another sublime world. Freaks Anon is a dark, weird fairy tale of monsters and heroes. Excellent."
- Rich Hawkins, Author of The Last Plague and The Last Outpost

Stand Up to Cancer (SU2C) is an initiative created to accelerate innovative cancer research that will get new therapies to patients quickly and save lives now. SU2C brings together the best and the brightest researchers and encourages collaboration instead of competition among the entire cancer community. The charity received a grade of A- from Charity Watch in September 2015. Approximately 77% of SU2C's cash budget is spent on programs versus overhead. Thank you for helping me stand up to cancer.
Available ebook formats: epub mobi pdf lrf pdb txt html
First 10% Sample: epub mobi (Kindle) lrf more Online Reader
pdb
Price: $3.99 USD
Buy Add to Library Give as a Gift
How gifting works
Create Widget
Tags: urban fantasy horror historical fiction paranormal supernatural science fiction werewolf superhero lycanthropy
About Matt Darst

Matt Darst got hooked on reading early. His best friend and next door neighbor, an octogenarian named Harvey, introduced Matt to encyclopedias when he was five. A year later, he received a subscription to National Geographic. It wasn't long before Matt had moved on to the hard stuff: fiction. He devoured read dog-eared copies of his dad’s Stephen King novels (“I learned it from you, Dad!”), Dune, the Hobbit, and Jungle Book.
By twelve, Matt’s addiction took a turn for the worse. He started writing…for fun. His experimentation with notebooks (a classic gateway) led to dabbling with typewriters.
Matt went cold turkey in law school. He decided to straighten out his life. He got a job, a house, and a dog. His normal life was good. Still…
Pen and pad call to Matt late at night, cooing his name, telling him to take one last hit of fiction. Sometimes, when Matt’s weak, he heeds the siren call of the drug. He wakes from each blackout amid reams of freshly written pages, pages that have seemingly written themselves. Somehow, they coalesced into a book.
Dead Things is Matt's first novel. His second, Freaks Anon, will be released in early 2016 through Grand Mal Press. 100% of the proceeds will be donated to cancer research.

You have subscribed to alerts for Matt Darst.

You have been added to Matt Darst's favorite list.

You can also sign-up to receive email notifications whenever Matt Darst releases a new book.