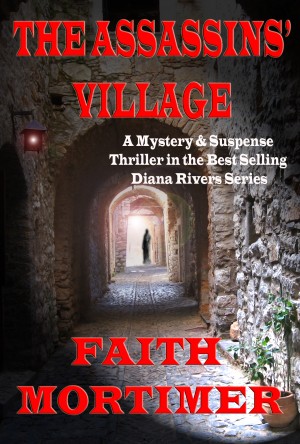 Love, hate, murder and high drama all feature in this classic detective story set on the island of Cyprus. With a long list of suspects, some dramatic twists and the odd red herring, the reader is left guessing until the final curtain. More
Bound and gagged, the shocked and terrified victim recognises his assailant. Days later, another body is discovered. How many assassins stalk the village?

In a picturesque Cypriot village an expatriate theatrical group gather to discuss their next play; but when the curtain rises it’ll be murder.
A blackmailer stalks the cast – a group riven with jealousies, rivalry, sexual tension and illicit affairs.

Unbeknown to each other they all attempt to find solutions to their problems. Some believe it lies in murder. Can they find the blackmailer? And can they find that all important ‘little black book’ – the chronicle of their misdeeds.

When a body is discovered, Diana, author and amateur actress, turns detective to draw up a suspects list. After the police get involved one of the suspects is found hanged - another murder or the suicide of a guilty person?

A visit to a villager’s home uncovers an ancient deadly device. Could this be the murder weapon? Is it possible that an assassin lives at the heart of this formerly peaceful and idyllic village?

Love, hate, murder and high drama all feature in this classic historical detective story. With a long list of suspects, some dramatic twists and the odd red herring, the reader is left guessing until the final curtain.

Faith Mortimer is a wife & mother, dividing her time between Hampshire, UK & Cyprus. Since childhood, she dreamt of writing novels which readers would love, & spent many hours writing short stories which she read to her sisters.
Later her dreams were put on hold while she focused upon her family & careers as a Registered nurse & later overseeing a string of travel & sport related companies.
Born in Manchester & educated in Singapore, Malaya & Hampshire, England.

THE ASSASSINS' VILLAGE (#1 Diana Rivers Series) Mystery suspense set in the Troodos mountains of Cyprus. This 93,000 word novel was chosen on the Harper Collins/Authonomy site out of over 8000 books to be the Number 1 book! A #1 Bestseller.

CHILDREN OF THE PLANTATION (#2 Diana Rivers Series) Mystery suspense, set in exotic Malaysia during the 1960's & 1950's 7 the present. Bestseller

A DEADLY LEARNING (#6 Diana Rivers series) Mystery/suspense set in Portugal. Murder and mayhem at a college.

ON CHRISTMAS HILL ~ A SEASONAL AFFAIR Holiday romance, with a 'feel-good' factor.

I love to hear from readers...your reviews & feedback are welcome! We writers need to know what you as readers enjoy. Please keep in touch by:

You have subscribed to alerts for Faith Mortimer.

You have been added to Faith Mortimer's favorite list.

You can also sign-up to receive email notifications whenever Faith Mortimer releases a new book.