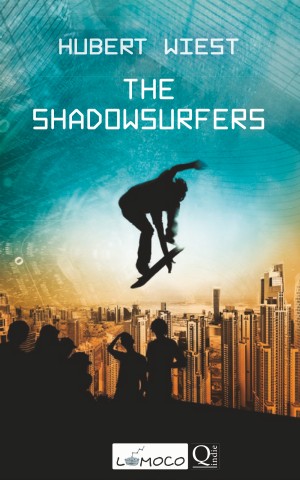 By Hubert Wiest
Set in a dystopian future where technology and humanity have united to create society’s collective consciousness called CHA, Sanzibar is almost ready to formally enter society and share all of her secrets, until she crosses paths with Luan, a gifted programmer orphaned in the forbidden city of shadows – together they find they’re not the only ones with secrets. More
CHA belongs to all humans. All humans are CHA.

Set in a dystopian future where technology and humanity have united to create society’s collective consciousness, Computerized Human Accomplishment, CHA is mankind’s most meaningful invention. Through CHA all of humanity’s thoughts and secrets are recorded and saved for the betterment of society.

Fourteen year old Sansibar is preparing for her final exam to become a part of society – a part of CHA. The only thing standing between her and her the Crystal Exam is a whisper of a memory almost forgotten… and a boy with blue-ink eyes named Luan.

Luan is a gifted programmer living as an orphan until a petty theft drives him from his only home. Without a place in society, Luan escapes to the forbidden city of shadows to live as a fugitive… with the help of a girl with purple hair named Sansibar.

Together they find they’re not the only ones with secrets.
Available ebook formats: epub
Price: $4.99 USD
Buy Add to Library Give as a Gift
How gifting works
Create Widget
Tags: suspense secret dystopia computer surveillance secrecy dystopian novel teenage novel
About Hubert Wiest

Hubert Wiest is an author of ten German children's books and YA novels. THE SHADOWSURFERS is his first US release. In addition to giving classroom readings, Hubert also produces audiobooks and the podcast Radio Lomoco together with Nina von Stebut.

Hubert was born in Germany in 1964. He studied at the Bavarian Academy of Advertising and also took courses in business administration. In the 1990s he founded the internet company FREIRAUM Multimedia, leading it through the stormy new economy of the millennium. He has also worked as head of marketing and sales in international companies. Hubert lives in Sydney, Australia, with his wife, their three children and their dogs Pepsi and Cola.

Reviews of The Shadowsurfers by Hubert Wiest

You have subscribed to Smashwords Alerts new release notifications for Hubert Wiest.

You have been added to Hubert Wiest's favorite list.

You can also sign-up to receive email notifications whenever Hubert Wiest releases a new book.