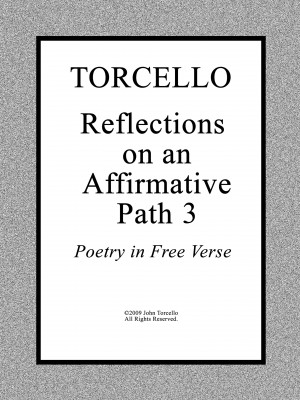 Torcello: Reflections on an Affirmative Path 3

By John Torcello
This third and final collection of this set of free-verse poetry addresses having arrived after heading even further down life's road. As the title suggests these pieces serve as the springboard for a new departure, not only for mid-lifers, but for all who seek insight, awareness, inspiration and positive encouragement.
Available ebook formats: epub mobi pdf lrf pdb txt html
First 50% Sample: epub mobi (Kindle) lrf more Online Reader
pdb
Price: $1.99 USD
Buy Add to Library Give as a Gift
How gifting works
Create Widget
Tags: poetry inspirational contemporary midlife affirmative positive insightful free verse mindful
About John Torcello

As George Harrison once said, "If you don't know where your going, any road will take you there..." John Torcello's writing is introspective, insightful and provocative; ever aware and mindful of the path travelled.

A graduate of the University of Toronto, Faculty of Music; he has a Bachelor of Music degree in Composition. He also holds an MBA in Marketing/Management from Woodbury University in Burbank, California.

John is an accomplished musician; appearing on occasion, as part of the orchestra, as a classical accordionist, with ensembles such as the Los Angeles Philharmonic in venues including the Hollywood Bowl, new Disney Concert Hall and Dorothy Chandler Music Center.

John was also a co-owner in the successful DVD Design, Compression and Authoring company called speeDVD that provided DVD-Video processing services to various Hollywood studio and distribution companies for 14 years.

Writing is an avocation for John; along with his musical SoundSketches constructions, his creative writing pieces are meant to be thoughtful exercises for the mind and heart of the reader and listener.

Reviews of Torcello: Reflections on an Affirmative Path 3 by John Torcello

You have subscribed to alerts for John Torcello.

You have been added to John Torcello's favorite list.

You can also sign-up to receive email notifications whenever John Torcello releases a new book.