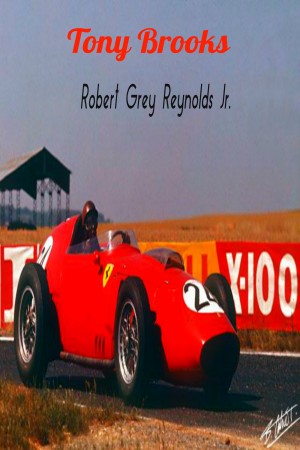 By Robert Grey Reynolds, Jr
Tony Brooks was a sports car racer and a Formula 1 driver from England. He drove a works Ferrari beginning in the mid 1950s, following a stint racing Aston Martin sports cars at Goodwood and Silverstone. Tony was trained as a dentist like his father. Stirling Moss, the great British driver, once made the statement that Brooks as the greatest unknown racing driver. Brooks retired after 1961. More
Anthony Miles Standish Tony Brooks drove a works Ferrari from 1956 until he departed to drive Cooper cars near the end of a career that ended in 1961. The son of a dentist Tony also trained to become a dentist before he went racing. His father gifted him with the first car that he entered in competition in Goodwood and Silverstone races. Brooks' performances in less significant races gained for him the attention of Aston Martin which signed him soon after seeing him race. Brooks finally decided to return to managing his garage in England after 1961. He made a statement about the dangers of the Formula 1 cars then running. It was among the reasons that he left F1 racing following the U.S. Grand Prix in October of '61.