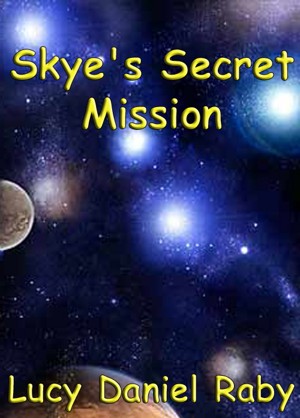 By Lucy Daniel Raby
Rated 5.00/5 based on 1 reviews
An exciting prequel to the sci fi fantasy adventure ‘Goddess in Pyjamas’, set on a faraway planet on the other side of the universe, where creatures like mermaids and winged humans are real! When Skye discovers an evil Chagrinian plot to assassinate their spiritual leader’s current re-incarnation on Earth, he decides to carry out a daring rescue mission through space and time. More
‘The minute he woke up, Skye knew something was wrong with today, or at least, that something was going to be wrong with today, at some point……’
This is how it all began …….Ventura is winner of 'Most Beautiful Planet in the Universe' award several centuries running. It has three moons, a huge sun that never stops shining and a population of strange hybrid species from earth’s ancient mythology. Here things like mermaids, many armed people and winged humans are real! Time moves faster, landscapes shift, and evolution has happened very differently from planet earth. Ventura is a perfect world of peace and harmony, where all the tribes live happily together…..but that’s all about to change!
That morning Skye wakes up to find that an urgent dawn meeting of all the Tribal Leaders has been called by Queen Andromeda, ruler of the Northern Hemisphere of Nimrovia. The Chagrinians – the evil reptilian race who were banished to the shores of the underground ocean after assassinating Ventura’s spiritual leader, Sunev - have risen again from the deep and conquered the Southern Hemisphere of Vardin. Panic breaks out at the announcement that they are planning to invade and conquer Nimrovia too! The Chags are coming and they are going to take over this world!
Skye, a Monrovian boy whose parents are close advisors to the Queen, is warned by his Uncle Tilmo, a Monrovian who converted himself into a Merman – that Sunev’s life is in danger again. He was re-incarnated as a human on earth and is now aged about 13, (in earth years that is). Skye is told by his parents that Sunev can’t be brought back before the end of his natural lifespan and is ordered to stay out of it, he is only a child. But Skye knows that the future of his planet is in peril. Plucking up his courage and disobeying authority, he ‘borrows’ his mother’s interplanetary spacepod and sets off on a daring rescue mission to Earth. He intends to save Sunev from annihilation by the Chags, and bring their Supreme Being in current human form back to Ventura to save their world!
He has a big surprise when he gets there – Sunev is not what he expected at all.

Lucy is an award winning children’s writer with 25 years’ experience in TV, Film, Animation, Puppets, Books and Theatre. She wrote her first book at five (soon to be published under the name of Clacketty Clack, as part of an e short story collection), and her first play at 8, a nativity play which was performed for many years at her old school. She went London university where she read English, before embarking on a writing career that included advertising copywriting, journalism, TV and film scriptwriting, books and now theatre.

She has worked on numerous children's TV shows, including triple award winning Shaun the Sheep, Angelina Ballerina, Chuggington, The Blobs, Gypsy Girl, Magic Key Adventures, the Hoobs and her own creation for CBBC, Big Kids.

Lucy is now also an author, with seven books published so far.

The second book in the series, ‘Nickolai’s Quest’, a sequel, was published in October 2007.

The film rights for Nickolai of the North have recently been re-optioned to Veneration Music who are in partnership with Pandemonium Productions and plans are under way for a major movie version.

Lucy has also written a stage musical adaptation of Nickolai of the North which was performed Christmas 09/10 at the Marine theatre in Lyme Regis, Dorset. Now published by Jasper Publishing, the play will be performed at more small theatres this Christmas.

Both Nickolai books are to be published as e books this year and Lucy is planning to write a third title to complete the series.

Two new e books are currently available on this site - 'Goddess in Pyjamas', the first in a fantasy adventure series set on a faraway planet, plus a free short story taster, Skye’s Secret Mission. .
There are more e book series in the pipeline and there will also be plenty of short story collections, giveaways such as prequels to her main novels and interactive story competitions.

Lucy will also be making her playscripts available as downloads, including Nickolai of the North the musical, Six Characters in Search of a Story, (also performed in Lyme Regis Oct 2010) and Kill the Lights, co-written with Duncan McIntosh.

Previous print books include 2 spinoffs from her TV episodes for Disney’s pre-school ‘Animal Stories’, ‘Sammy the Hippo’ and ‘Camilla the Camel’, and ‘Lily the Lost Puppy‘, a book for 4 - 7 year olds, part of the Puppy Tails series, for Working Partners/Macmillan publishers.

Lucy also does teaching and author visits to schools, universities, arts and litfests, libraries and book clubs, including her now popular 'Hands on Story Workshop with Takeaway Results. For more info go to the schools page on her website.
To find out more about Lucy and her work, so to www.lucydanielraby.co.uk.

What a brilliantly realised imaginative world! Overflowing with inventive, colourful and hilarious alien beings, the action zips along at a dizzying pace. A fearless hero, Skye never flinches from seemingly impossible challenges. The stakes are high - His Holiness, Sunev, is in danger and there's a planet to save. A thrilling, fun read. Can't wait to read the sequel ... .

You have subscribed to alerts for Lucy Daniel Raby.

You have been added to Lucy Daniel Raby's favorite list.

You can also sign-up to receive email notifications whenever Lucy Daniel Raby releases a new book.