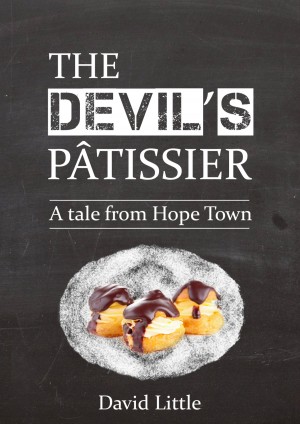 A darkly funny short story about the occult, murder and baked goods. More
Welcome to Dòchas, Scotland, a place that since 1437 and due to a quirk of fate (not to mention the whim of a six-year-old newly crowned King) is the centre of all things weird, wonderful and occasionally stomach churning. Inhabitants include various religious cults, vigilantes, aliens, spies, mystical beings, werewolves and evil scientists hell bent on unleashing potentially earth ending threats or finding new flavours of ice cream. The only people who stand in the way of the chaos are a small, and terribly overworked local police force.

David Little wrote his first full length novel when he was 16. Titled "The Old Firm" it was an homage to the classic Universal horror films that he used to watch as child - but shouldn't have really - juxtaposed with the modern, blood filled remake culture of the 80s. One person read the novel and asked if it was for adults; when Little nodded, the reader shook his head. The reader asked if it was children; when Little hesitatingly nodded, the reader shook his head again.

Undeterred, the author embarked on many years of hopeful writing, whilst battling against the crippling disease Procrastination. It was a long, hard slog and a battle that often he felt he would never win. Ideas, plots, characters and potential product placements came and went, as did a mild addiction to A1 steak sauce, but it was not until 2010 that he was able to finally complete that tricky second novel.

"Am/Dram" - the slash is important here - told the tale of murder, rain, affairs, rain, more murder and some rain, all centered around an amateur dramatic company and their production of the difficult "play after the Christmas Panto". It has not been read or critiqued, and may stay mysterious for quite some time.

Turning his attention to writing short stories, Little found himself focusing on an idea that had been gestating for many a year; a small Scottish village that had once inextricably found itself as the Capital of that great nation and as a result seemed to harbour strange and unusual characters and events. After some soul searching, and a dalliance with A1 sauce once again, the premise of the Hope Town series was fleshed out and is running along like something that runs along quite quickly and may take quite a bit of effort to stop.

The first tale from Hope Town "The Devil's Patissier" was published on 31st October 2015 and as of January 2016 there are 4.5 published. Subsequent tales will evolve over what is planned to be a 3 year lifecycle.

David Little lives in Scotland with his wife, two children, dog and a cupboard only half full of A1 steak sauce.

About the Series: Tales From Hope Town

A series of short stories set in the strange town of Dóchas, Scotland where the weird and wonderful reside.

You have subscribed to alerts for David Little.

You have been added to David Little's favorite list.

You can also sign-up to receive email notifications whenever David Little releases a new book.