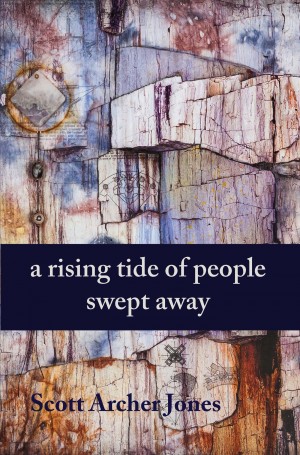 A Rising Tide Of People Swept Away

The boy gladly trades family for a hodgepodge of drinkers and losers. But it's bad timing. A new bridge proposed across the Rio Grande will wreck the fragile ghetto. The barflies share responsibility for the child while their Bosque crumbles. They collect misery like small change and rally to keep their neighborhood alive. Will the working poor beat City Hall and keep the kid out of the system?

Price: $4.99 USD
Buy Add to Library Give as a Gift
How gifting works
Create Widget
About Scott Archer Jones

Scott Archer Jones is currently living and working on his sixth novel in northern New Mexico, after stints in the Netherlands, Scotland and Norway plus less exotic locations. He’s worked for a power company, grocers, a lumberyard, an energy company (for a very long time), and a winery. He has launched three books. Jupiter and Gilgamesh, a Novel of Sumeria and Texas in 2014, The Big Wheel in 2015, and this one, a rising tide of people swept away.

You have subscribed to alerts for Scott Archer Jones.

You have been added to Scott Archer Jones's favorite list.

You can also sign-up to receive email notifications whenever Scott Archer Jones releases a new book.