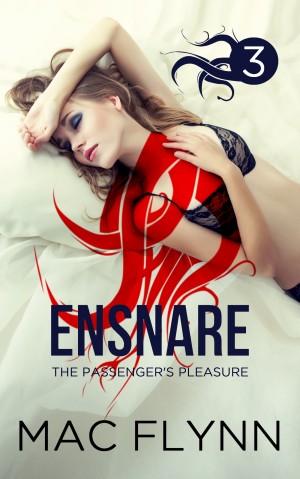 A seductress of sensual words and a lover of paranormal plots, Flynn enjoys writing thrilling paranormal stories filled with naughty fun and hilarious hijinks. She is the author of numerous paranormal series that weave suspense, adventure and a good joke into a one-of-a-kind experience that readers are guaranteed to enjoy. From long adventure novels to tasty little short-story treats, there's a size and adventure for everyone.

Want to know when her next series comes out? Join The Flynn newsletter and be the first to know! macflynn.com/newsletter/

Also check out her website at macflynn.com for listings and excerpts of all of her books!

About the Series: Ensnare the Passenger

Jane Johnson won an all-expenses paid trip aboard a cruise-liner, but she finds herself an outcast at sea. Things change one night during a party below-deck when one of the rich, handsome passengers produces a book and offers it as a prize to the woman who would have his heart. Scuffles ensue and through strange luck she finds herself in possession of the book.

Little does she know what sweet delights await her between the folds of its pages.

Also in Series: Ensnare the Passenger

You have subscribed to Smashwords Alerts new release notifications for Mac Flynn.