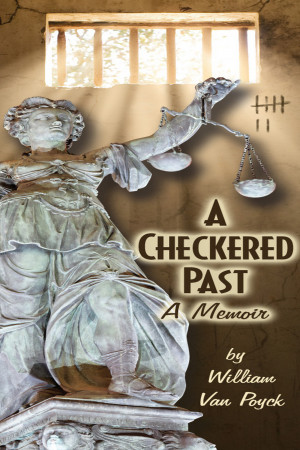 By William Van Poyck
Rated 5.00/5 based on 3 reviews
Miami native William Van Poyck- burglar, bank robber, escape artist, and novelist - pens a sweeping, vividly sketched autobiography guiding readers on an unforgettable, four-decade odyssey, from barefoot youth to reform school to death row. Projected through the lens of raw experience, this is a brutally authentic look into the hardscrabble underbelly of America's criminal justice system. More
In April, 2004, A Checkered Past won first place (memoir category) in the Writer's Digest International Self-Publishing Book Awards, edging out over 1,000 other entries.

I am a single dad of 5 children from 21 to 12. I am the CEO of a private 132-bed work release center for men who are transitioning from prison back into society. I spent a total of 18 + years of my life before being paroled in 1984. Ten years later I was given a full pardon from Florida Governor Lawton Chiles. Today I run my own minimum security prison/work-release center. God is good!

I am also the State Chairman for the Constitution Party of Florida www.cpflorida.com. I ran for the U.S. Senate in 2010.

To straighten out any confusion, the person writing "About William Van Poyck" is not the author, but the publisher. As I said in my review, Van Poyck was executed in June of 2013.

I could not put this book down and ended up purchasing all of Billy`s books. I would highly recommend this book. The only regret that I have is that I did not know about the books until after his unjustified death last month.

(reviewed the day of purchase)
C S McClellan reviewed on June 15, 2013
(no rating)
A Checkered Past is a powerful and moving memoir by a man whose life began to unravel when he was only eleven-years-old. The result was an escalating series of crimes and prison sentences, until he was convicted of felony murder and sentenced to death. Bill Poyck died in the execution chamber on June 12, 2013, after having written this memoir and two novels, and served as a jailhouse lawyer, working to help unjustly imprisoned men to gain their freedom.

This is a must-read for anyone who wants to understand why so many people and organizations are working to amend laws that are putting more and more people in prison, and killing more of them. It is only one of many authentic insider views of the abominable conditions that exist in so many prisons, and the misery that is the American justice system, but it's an important one.

This is the first time that I have read one of Billy's books and I can tell you that it is a great read. Knowing Billy in his early years as I did, I recalled many of the situations he had gone through. His writing seemed to be very balanced and on spot for the years that I knew him. I lost contact with him after '71-'72 so I can't really comment on his later years. However, his candor throughout this publication made me a believer and his story was a real awakening for me. I was shocked as to the degree of corruptness in the Florida State Penal System and saddened by the terrible decisions that Billy continued to make in his later years. However, After having read his book, I truly felt that he owned up to his responsibilities for his actions, while at the same time, wishing he had gone in a different direction.

This book is very well written, and at times quite disturbing, but you will not be able to put it down after you start reading it.

That being said, you will definitely not be disappointed in reading this astonishing memoir of William Van Poyck's life.

You have subscribed to alerts for William Van Poyck.

You have been added to William Van Poyck's favorite list.

You can also sign-up to receive email notifications whenever William Van Poyck releases a new book.