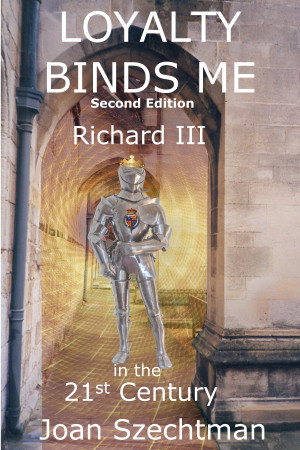 Loyalty Binds Me: Richard III in the 21st Century--Book 2

Reviews of Loyalty Binds Me: Richard III in the 21st Century--Book 2 by Joan Szechtman

A History Lesson With a Bang!

Having read This Time, the first book in the series, I felt compelled to discover what happened in the sequel. The author did not disappoint me. When Richard and his new family make a pilgrimage to England, they’re propelled into a political chess game between “friendly” world powers. Governments are anxious to secure the “time travel” device invented by Sarah, Richard’s new wife, but they also want proof that it works. Arrested for a crime that might have occurred 500 years ago, Richard is faced with a “no win” situation, lie or remain silent and get locked up for years as a “terrorist threat.” He might protect himself but what will happen to his family in the meantime?

Richard understood politics in ancient England, but a battle of wills involving the FBI and MI5 might be beyond his abilities. Luckily “Dickon” finds champions for his cause, a Ricardian solicitor and a feisty woman reporter. How can he “prove” he didn’t murder his nephews in 1483 when the authorities are determined to compare his DNA to bones found at the Tower of London?

I absorbed more English history in these novels than I ever learned in high school. That’s probably due to Joan’s superb skill as a writer. She brings the fascinating mystery and intrigue during the 15th century to life in a character who remembers the events. But why should anyone in modern times care enough about Richard III to form a society and hold “mock” trials about his guilt or innocence? Historians should follow Joan Szechtman’s example and “transport” their favorite characters from history into an interesting novel. We might all learn more than we ever thought possible. She weaves enough information from the first book into the sequel to make it a stand-alone novel. Buy this book today and get a “history lesson with a bang.”