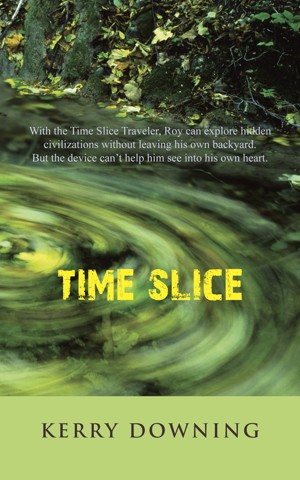 By Kerry Downing
Newly retired Roy Washburn is bored. Then he finds a cylinder that sends him on an adventure in the Time Stream, where other civilizations co-exist on “his” Earth. He meets the Traveler, who wants Roy to retrieve a lost object for him. Despite the dangers, Roy wants to help. But he can’t do it without his loving wife and loyal friends. First he must convince them he isn’t crazy ... More
Newly retired workaholic Roy Washburn is not ready for a life of leisure. On a trip to the mall with his wife, he finds a small metal cylinder with odd markings. One nudge of the cylinder’s triangle-shaped pointer and Roy finds himself embarking on an exciting new adventure in the Time Stream.  There he meets The Traveler, a tall, gangly being who shows Roy how to use the cylinder to visit other civilizations that co-exist on “his” Earth, each occupying a different, thin Time Slice. The Traveler solicits Roy’s help in recovering an object invented by his murdered father and beyond his own reach. Roy is his last hope. At first it seems that the Traveler’s wish might be easily granted. But after Roy’s wife Emily becomes ill and his daughter’s long-held resentments rise to the surface, he can no longer “travel” at a moment’s notice. He also discovers the very real physical and mental risks involved in roaming the Time Stream. Despite the dangers, Roy is determined to help the Traveler. But he can’t do it alone. Fortunately he has a loving wife and a core group of loyal friends. But first he must convince them—and his daughter—that he isn’t crazy ...
Available ebook formats: epub mobi pdf rtf lrf pdb txt html
First 10% Sample: epub mobi (Kindle) lrf more Online Reader
pdb
Price: $0.99 USD
Buy Add to Library Give as a Gift
How gifting works
Create Widget
Tags: san francisco aliens ocean retirement alternate reality senior citizens alternative reality friendly alien cocoon the movie
About Kerry Downing

Kerry Downing set out to become a meteorologist, but was hooked by the world of computers instead, becoming a systems analyst and programmer. Astronomy and science fiction are his passions. He’s been gazing at the stars at all hours of the night since the age of 10, when he received his first telescope. As for science fiction, Arthur C. Clarke and his brand of “it really seems as if it could happen” has always been his favorite. In the 90s, Kerry found the third love of his life: his wife, Lucy. They live in St. Louis, Missouri, with their five children. This is Kerry’s second science-fiction novel.

You have subscribed to alerts for Kerry Downing.

You have been added to Kerry Downing's favorite list.

You can also sign-up to receive email notifications whenever Kerry Downing releases a new book.