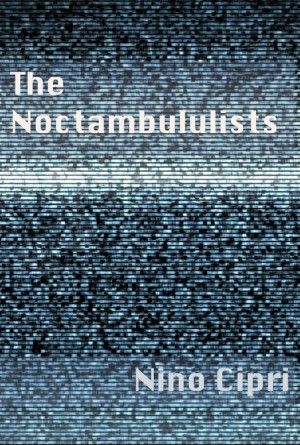 By Nino Cipri
The TV is small, just like everything in your apartment. Onscreen, there's a woman sitting behind a desk. Her dark hair hangs straight down the sides of her cheeks, and her pale face looks like a full moon, suspended in the darkness.

You turn towards the TV. It's small, just like everything in the apartment. The screen is about 14 inches, square, and the rabbit ears have little caps made of tinfoil. The color balance has always been weird, and shows have a gaudy orange tint. On the screen, there's a woman sitting behind a desk. Her pale, pale face looks like a full moon, suspended in the darkness. Her eyes are almond-shaped and her face is round. Her dark hair parts in the center of her scalp and hangs straight down the sides of her cheeks. There's a black velvet curtain behind her, and her black clothes and hair melt into it a little.

"Are you home alone?" this creepy lady says from the TV. "You are, aren't you? It's just you, there. And just me, in here. Just the two of us. Alone together, here at the end of the night."

Nino Cipri is a queer and genderqueer writer living in Chicago. A graduate of the 2014 Clarion Writers’ Workshop, Nino's writing has been published or is forthcoming in Podcastle, Interfictions, Tor.com, Fireside Fiction, Betwixt, Daily Science Fiction, and other fine publications. A multidisciplinary artist, Nino has also written plays, screenplays, and radio features; performed as a dancer, actor, and puppeteer; and worked as a backstage theater tech.

One time, an angry person called Nino a verbal terrorist, which has since made a great T-shirt slogan.

You have subscribed to alerts for Nino Cipri.

You have been added to Nino Cipri's favorite list.

You can also sign-up to receive email notifications whenever Nino Cipri releases a new book.