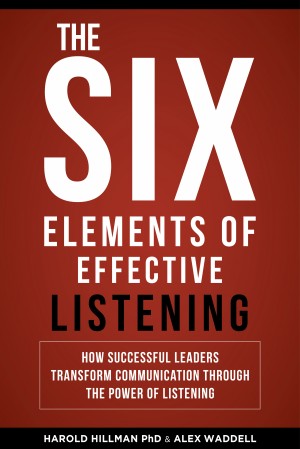 The Six Elements of Effective Listening: How Successful Leaders Transform Communication Through the Power of Listening

You’ll never be a good listener if you have nothing to learn. You can’t be influenced to see things differently if you don’t believe there’s anything to learn from another person….or from the team. When people engage with you in conversation, do they experience someone who is open or closed? Helpful or unhelpful? If your goal is to be a better teammate, you don’t want to leave these questions to chance.

Think about active listening as switching between channels on a television, where you listen with a different ear depending on what’s required in the conversation. Your ability to switch channels is especially helpful when someone at work asks you to help them think through something difficult or complex. To be a better teammate, you should ask this question more frequently: How do you want me to listen?

There are six ways to listen more effectively in a conversation:

1. Listening with Compassion. When a person asks you to listen, don’t assume that they need you to do anything, or fix anything for them. Sometimes all they really want is for you to understand what an experience has been like for them, especially something difficult. Put simply, they just want you to listen to how they feel.

3. Listening for Assumptions. This listening style requires you to listen intently because your goal is to pull out every assumption that you think might be worth testing. An example of listening for assumptions would be: You’re saying that our older customers won’t mind the shift to younger styles – is that a fair assumption? Questions like this will slow the conversation down, but may save the team months of clean-up if an assumption is faulty.

4. Listening as the Contrarian. This style gives you permission to listen as the opposition – and to point out all the holes you hear in their argument. This listening style is especially helpful if the team tends to have safe and cautious conversations, or rushes to decisions without vetting all possible risks. The contrarian can bring out things that might otherwise go unspoken.

5. Listening for Balance. Balance comes in many forms and shapes. There are countless polarities that often get skewed in one direction or the other. It helps if someone on the team plays an active role to make sure that there is no gaping hole caused by some view point that is missing. Listening for balance is especially helpful if a person is rigidly locked onto a position, or the team is full of people who think in one particular way.

6. Listening for the System. Sometimes on a team, people are myopic around their own issues and no one listens to hear how the whole system is impacted. It undermines performance when they take their collective eye off the bigger picture. This listening style is especially important when people who are not involved in the conversation will still be affected by the decision.

When results really do matter to a team, they work hard to have high quality conversations. That can’t happen if everyone is talking and no one is listening. This book will make it easier to ask the question: How do you want me to listen? That can truly make the difference between good and great.
Download: epub mobi (Kindle) pdf more Online Reader
lrf pdb txt
Price: Free! USD
Add to Library
Create Widget
Tags: leadership self improvement communication listening business communications collaboration and success organization and management influence and leadership alex waddell harold hillman
About Harold Hillman

Harold Hillman is the managing director of Sigmoid Curve Consulting Group. Based in Auckland since 2003 and a New Zealand citizen since 2008, Hillman coaches business leaders and executive teams to be more purposeful about leadership and what it means to inspire others towards greater possibilities.

Prior to launching Sigmoid, Hillman served in senior executive roles with Fonterra, Prudential Financial and Amoco Corporation. A clinical psychologist in his early career, he developed a passion for leadership development while teaching at the United States Air Force Academy. Hillman was a member of the task force commissioned by the Clinton administration in 1993 to end discrimination against gay citizens wanting to serve openly in the US military.

Hillman earned a master’s degree in education from Harvard University and a PhD in clinical psychology from the University of Pittsburgh. His first book, The Impostor Syndrome, was published in 2013. Hillman’s second book, Fitting In-Standing Out, was published in 2015 and brought major attention to his personal story of living an inauthentic life as a well-decorated military officer, who happened to be a closeted gay man.

A big fan of learning curves, Hillman has set himself a major goal to continue exploring over the next decade the frontier of authenticity, pushing forward into uncharted territory.

Reviews of The Six Elements of Effective Listening: How Successful Leaders Transform Communication Through the Power of Listening by Harold Hillman & Alex Waddell

You have subscribed to alerts for Harold Hillman.

You have been added to Harold Hillman's favorite list.

You can also sign-up to receive email notifications whenever Harold Hillman releases a new book.