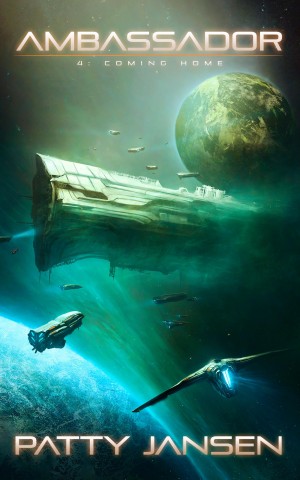 By Patty Jansen
Rated 5.00/5 based on 1 reviews
The Aghyrian ship that left over 50,000 years ago has come back. Where have they been, who have they met and what do they want? By isolating the captain from the ship, Cory hopes to neutralise it, but the captain is a manipulative bastard who will stop at nothing to re-capture his home planet. More
The world as we know it is on a certain path to war...

Delegate Cory Wilson has returned to gamra headquarters from deep space with a rather unwelcome guest: Captain Kando Luczon of the mammoth Aghyrian ship that has returned after mysteriously vanishing 50,000 years ago. On board the ship only 400 years have passed, in which they have visited another galaxy. But the captain isn't willing to share what they found there or why they decided to come back. In fact, the captain does his utmost best to live up to his infamous historical reputation as an utter jerk, having lived through four hundred years to cultivate his jerkery.

Cory had hoped that by isolating the captain from his ship, mostly still in stasis mode, he could start a conversation, but Kando Luczon isn't interested in a conversation. He views the modern version of his home world Asto as inferior, its inhabitants the Coldi as nothing but a placeholder race and all other races as savages.

Meanwhile the ship is showing signs of waking up, ancient satellites in orbit in the space junk clouds around Asto and Ceren sputter into life, and Asto's Chief Coordinator and Cory's friend Ezhya Palayi makes it clear that if pushed, Asto's formidable military fleet will take defensive action.

This volume follows on almost immediately from the previous one, which makes me so glad I didn't have to wait months for it's release before grabbing it.

Now Cory Wilson has the captain of the ship and two members of his crew chosen at random, staying in his house. Not trusting them, he's hoping to get information from them regarding the ship and what the captain intends to do.

More action, small scale stuff, not battles, in this story. Once again it concerns the frustrations of Wilson as he tries to deal with a worsening political situation, missing people, and a looming war all while trying to understand how the social aspect of his team/household works. This is no doubt an ongoing thing for Wilson. Just when you think you understand a part of a culture, something comes along and trips you up. Or, usually in his case, you keep thinking of it in terms of your own culture. Caught between the two. That's Mr Wilson.

There's a lot going on in this world. As a reader you know as much as Wilson does. Some threads seem to be connected, but how? Like peeling an onion, as you remove one layer of obstruction, another is revealed below. As with the other books it's very easy to get into. I'm invested enough to want more of the story and these characters. The two younger members of his team could be worth a story or two of their own (*hint to the author*) :-)

A last comment. This is book 4, I've read all 6 books now and will read book 7 when it is available. Sometimes with SF stories, the author tries to make the alien more alien by giving them a name that is almost impossible to pronounce. Nothing jars me out of a story more that having to try and figure out how I should pronounce Aeirrllleuhf or some such ridiculous name. Thankfully there's none of that in these book.