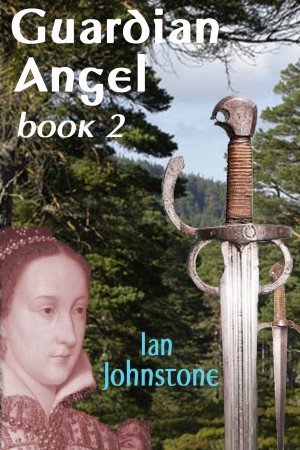 By Ian Johnstone
Visions of the past and the re-appearance of his guardian angel left Douglas in confusion. A battle over forestry encroaching on his land was taking all his time, but a crofter’s cottage hidden in those trees might reveal a secret. Was that what the dreams were all about, or was there more from the past that he needed to know, perhaps buried in the books, letters and clues his mother left him? More
Lord Douglas Ahearn Stuart was again having dreams – or perhaps visions – of the past. At the same time, his “guardian angel” again appeared, with her usual cryptic comments and refusal to answer any direct questions, even though she clearly knew all the answers of the past and the future.

With an on-going battle over forestry encroaching on his land taking up much of his time and threaten the safety of his staff and family, Douglas had little opportunity to investigate the meaning of his dreams and the true events of the past in the books in his extensive library, or follow up the clues his mother left him. Was there a dark secret to the ancient crofter’s cottage hidden in the trees, and would it reveal the secrets of the weapons belonging to King James IV of Scotland? Did the English take those weapons at the Battle of Flodden, or were they still somewhere in Scotland?