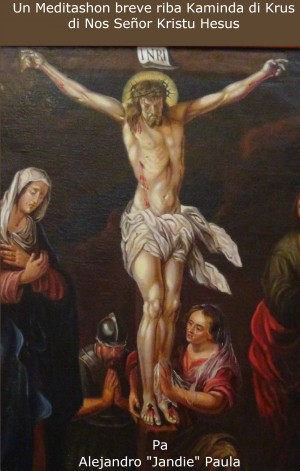 By Alejandro "Jandie" Paula
This book is meant as a meditation on Jesus' suffering and death. It is written in Papiamento the language spoken in Curaçao. More
The book is based on the fourteen stations of the cross as traditionally focused upon by the Catholic Church especially during the Holy Week. Besides it's devotional aspects it is also meant to fill a certain need in the Papiamentu language.
Download: epub mobi (Kindle) pdf more Online Reader
lrf pdb
Price: Free! USD
Add to Library
Create Widget
Tags: christ died for all christ and the cross papiamentu pietermaai
About Alejandro "Jandie" Paula

Curriculum Vitae
Alejandro "Jandie" Felipe Paula was born in Curaçao on the 2nd of May 1937.
He received his secondary and higher education in Trinidad and Tobago, in the Dominican Republic, The Netherlands and Rome. In 1966 he obtained his doctorate degree “cum laude” at the Saint Thomas of Aquinas University in Rome, defending a thesis titled from Objective to Subjective Social Barriers.
From 1969 to 1988 he was the director of the National Historical Archives of the Netherlands Antilles.
In 1989, he was appointed lecturer of sociology and philosophy of law at the University of the Netherlands Antilles, followed by his appointment in 1990 as professor.
In 1992, he was admitted to the degree of doctor in the social sciences at the University of Utrecht in the Netherlands, defending a thesis titled “Free-slaves”.
End 1993 to the beginning of 1994, he was Prime Minister of the provisional government of the Netherlands Antilles.
Subsequently he was member of the Advisory Counsel of the Netherlands Antilles up to 1998. During the period 1997 until 2000, he was Rector Magnificus of the University of the Netherlands Antilles.
He was decorated knight in the Order of the Lion of the Netherlands(1995) and Knight in the order of Saint Silvester(2004)
In 2011 the Peter Stuivesant secondary school was renamed after him, i.e. Kolegio Alejandro Felipe Paula.
On October 5th 2001, he received the Harold Silvano Integrity Recognition from the ‘Plataforma Wishi/ Marchena’.
In 1966 Paula contracted matrimony with Monica Beddoe. They have two children and five grand children
Publications
From Objective to Subjective Social Barriers. (1966)
1917 – 1937 Problemen rondom de emigratie van arbeiders uit de kolonie Curaçao naar Cuba (1973)
De slavenopstand op Curaçao; een bronnenstudie van de desbetreffende originele overheidsdocumenten. (1974)
Slavery in a Nutshell. (1987)
Hoofdmomenten uit de staatkundige ontwikkeling van de Nederlandse Antillen. (1988)
Vrije slaven. (1992)
The Cry of My Life; Bitterzoete herinneringen aan een levensweg vol kronkels. (2005)
Pensamentunan djayera resonando den aktualidat (2012)
Resurekshon Un speransa nobo pa humanidat (2013)
Breve Historia di Kas Real Hulandes (2013)

You have subscribed to alerts for Alejandro &quot;Jandie&quot; Paula.

You have been added to Alejandro &quot;Jandie&quot; Paula's favorite list.

You can also sign-up to receive email notifications whenever Alejandro &quot;Jandie&quot; Paula releases a new book.