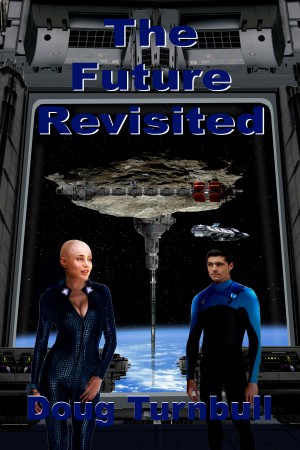 By Doug Turnbull
Something old and something new-The Future Revisited, is a collection of tales from the future including a previously published mystery novella and an award winning short story, as well as two new novellas. Well-seasoned with space science, both the mysteries and the Mars stories present an optimistic, upbeat vision of that future. More
Stand by for four exciting tales from the Martian past and future! Two Andy Andersen novellas as well as a short story and novella on the Alien Artifact timeline make up this collection of science fiction by the author of The Man Who Conquered Mars, Jupiter IV, Footprints in Red, and Zachary Dixon: Officer Apprentice. Open this book and experience these unusual and thought provoking stories!

Ribbon to the Sky-A rogue asteroid threatens all life on Earth! Ascend the fabulous space elevator with Captain Andy Anderson on a mission with a group of scientists to investigate Scranton Asteroid, a mission that leads to an amazing discovery. When Andy discovers a sinister plot to sabotage the mission, only a race against time can save the day.

Dangerous Passage-Andy Andersen reprises her role as ship’s captain, this time commanding a luxury liner on a routine run to Mars, routine, that is, until she receives a message:
“If possible, could we meet privately, ASAP?”
(Signed) Chief Steward Frizzell
Then the voyage becomes anything but routine.

Tenderfoot-An immigrant boy quickly learns that his new home on Mars is a long way from Kolkata. Kumar Sharma is not a happy camper when he discovers that he has lost his Scout ranking and is a Tenderfoot again.

Mission: Mars- Travel with Dr. Helen Meers as she directs the robotic construction of Schiaparelli Station, Mars first human settlement; and eventually becomes a settler herself. Meet robotics tycoon, Bill Mayfield, and the handsome former Marine, Hector Rodriguez, who also appears in Jupiter IV, as they vie for Helen’s affection. For action, romance, and adventure, all liberally seasoned with science, this is the story for you.

Mr. Turnbull is an award-winning author of several science fiction novels and short stories, Op-Ed “Expert Voices” Columnist for Space.com, as well as a contributor to Astronomie-Québec. He was recently featured on the NBC News website about an interview with Alan Boyle, NBC’s Science Editor. In addition he is a public speaker to audiences like those of the Institute for Astronomy at the University of Hawaii and the Mars Society-USA.
Available ebook formats: epub mobi pdf lrf pdb txt html
First 20% Sample: mobi (Kindle) lrf pdb Online Reader
Price: $3.49 USD
Buy Add to Library Give as a Gift
How gifting works
Create Widget
Tags: mars robots red planet moon colony nasa space flight space program proton roscosmos baikonour
About Doug Turnbull

Reviews of The Future Revisited by Doug Turnbull