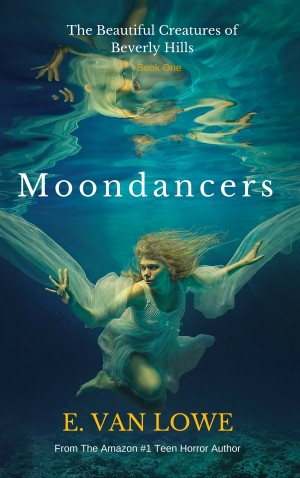 By E. Van Lowe
There is a creature haunting the swimming pools of Beverly Hills. Is there a connection between the creature and the beautiful girl Josh is falling head-over-heels in love with? Secrets, lies, true love, and murder are at the heart of this action packed paranormal romance. More
"Young love, paranormal creatures, and murder."

There is a creature haunting the swimming pools of Beverly Hills. 16 year-old Josh Butters believes he sees a connection between the creature and the mysterious and beautiful girl next door. Before long, Josh finds himself falling head-over-heels in love with the girl, Lara, who it turns out is an enchanted being. Josh discovers that he and Lara are soulmates, drawn together by the siren’s song, destined to be together from birth. But there’s a dark secret to being Lara’s soulmate, a secret that involves battling creatures, and an age-old feud. Josh must decide if the price for being Lara’s one true love is a price he’s willing to pay. It could cost Josh, his family, and friends their lives.

E. Van Lowe is an author, television writer, screen-writer, playwright and producer who has worked on such TV shows as "The Cosby Show," "Even Stevens," and "Homeboys In Outer Space." He has been nominated for both an Emmy and an Academy Award. His first YA Paranormal novel, "Never Slow Dance With A Zombie," was a selection of The Scholastic Book Club, and a nominee for an American Library Association Award. His Best Selling novels, "Boyfriend From Hell" and "Earth Angel," are the first two books in the Falling Angels Saga. "Heaven Sent" and "Falling" complete the saga.

E lives in Beverly Hills California with his spouse, a werewolf, several zombies and a fairy godmother who grants him wishes from time-to-time.

About the Series: The Beautiful Creatures of Beverly Hills

Dangerously exciting, yet mystical and romantic, The Beautiful Creatures of Beverly Hills is a page turning series that asks the question "do you believe in soulmates?"

Also in Series: The Beautiful Creatures of Beverly Hills

You have subscribed to alerts for E. Van Lowe.